Muralists and street artists are the tricksters of public art. They play with scale, making familiar objects giant. They slip in visual puns and sly references, simultaneously secret and bold as a howl. They create monuments to people and moments they deem heroic. From hidden alleys to busy streets, they highlight San Diego's unique landscape and show off the city's creativity. Follow a trail through San Diego's colorful street art to get a glimpse into the destination's diverse neighborhoods. 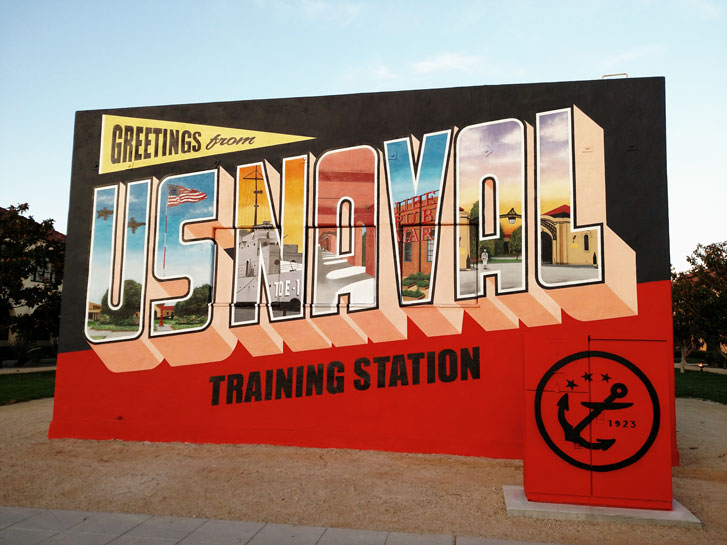 Greetings from the U. S. Naval Training Station

ARTS DISTRICT Liberty Station was once a Navy training center, welcoming the first class of recruits to its Spanish Colonial Revival buildings in 1923. Now a mecca for food, art and niche shopping, this once abandoned space is a thriving community that knits its present and past seamlessly. In one of the newest additions to the scene, Victor Ving transformed an old pump house into an enormous vintage postcard incorporating the evolution of Liberty Station into a cohesive piece of art. It even has a cameo appearance by Ving and his photographer girlfriend, Lisa Beggs. Take some time and see if you can you spot them? 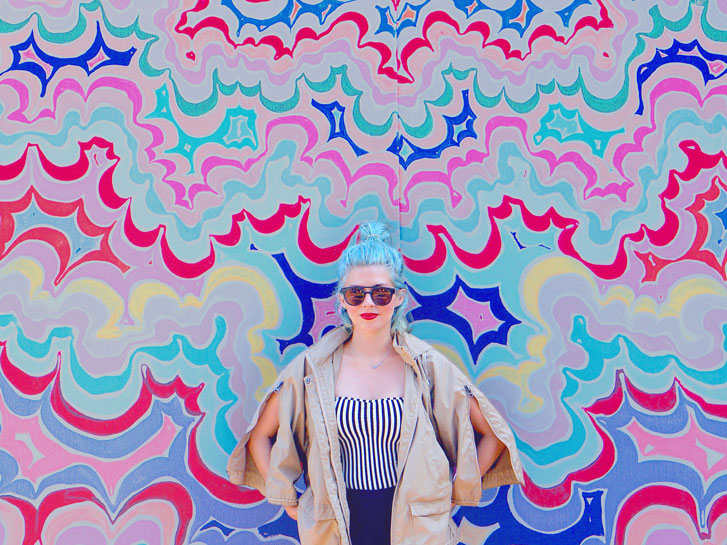 Since 2010, the "Murals of La Jolla", a joint project of the La Jolla Community Foundation and The Athenaeum Music & Arts Library, has brought enormous works from heavy hitters like John Baldessari, Terry Allen, Catherine Opie and Mark Bradford to the already scenic seaside village. One of the local stars featured in the collection is Kelsey Brookes, who contributes his psychedelic "One Pointed Attention." Visitors respond playfully to the pulsating waves - but Brookes says his intent was actually to create "a two-dimensional representation of meditation." Snap your selfie, and then take a moment to pause, focus and let your eye follow the path of his brush. With a refreshed perspective, go on to visit fifteen other murals within walking distance. More on the Murals of La Jolla. 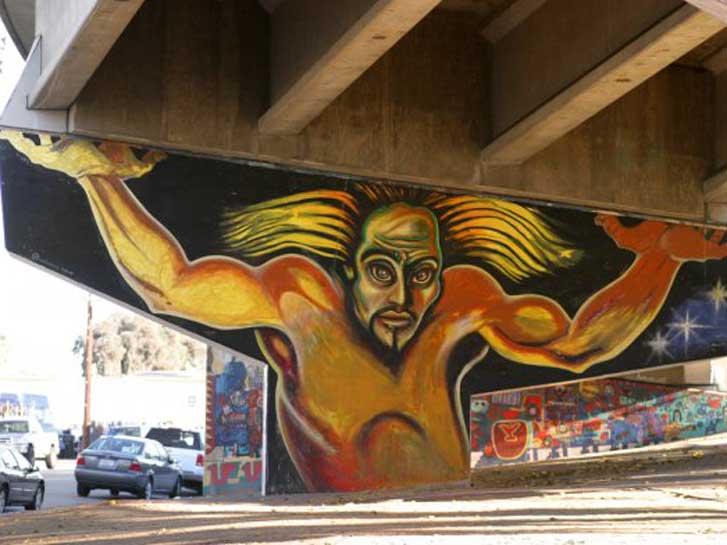 Chicano Park is a cultural treasure not only for the story of how it came to be but also because of the quality of its art, which has been decades in the making. Roughly 80 artworks fill seven acres of parkland, reaching high into the sky on the concrete pylons supporting the Coronado Bay Bridge. The first were painted in 1973, approximately two dozen were restored in 2011 and 2012, and in 2017 the collection was named a National Historic Landmark.   A part of this catalyst group of muralists who started the evolution of what Chicano Park is today is Mario Torero.  Torero, a dedicated artist and self-proclaimed “artivista,” is responsible for iconic pieces like “Colossus” which he painted in 1975. Torero describes the mural as the “reawakening of the Sleeping Giant, setting off the imagination of all pass-byers.”  More on the Murals of Chicano Park. 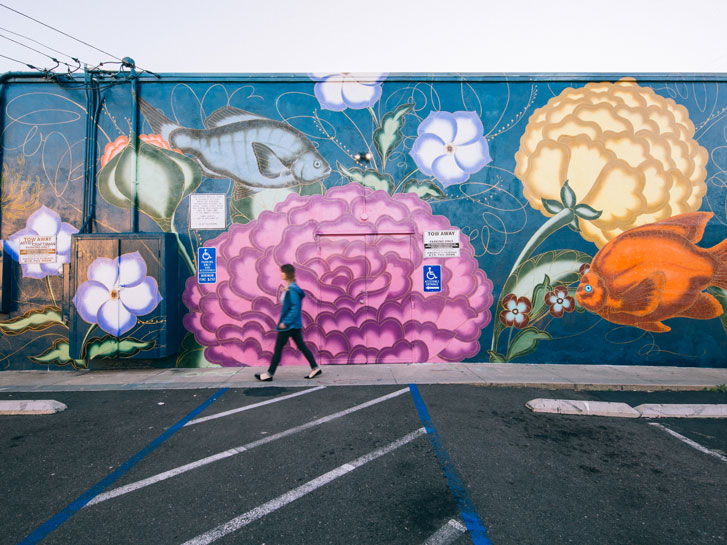 In the fall of 2016, San Diego's Cohort Collective teamed up with Hawaii-based PangeaSeed Foundation, the music festival KAABOO, Surfrider Foundation and several national and international artists including Askew, Lauren YS, Aaron Glasson and Persue. They installed 18 murals designed to raise environmental issues by "taking the oceans to the streets." From Encinitas to Imperial Beach, they created poignant and passionate statements on overfishing, whale and dolphin captivity, and ocean acidification. In Hillcrest, the back side of Artist & Craftsman Supply provided the spot for muralist Jet Martinez. Soak in the lush forms and delicate tracery evoking Mexican embroidery, but take note of the message: Pesticides used in commercial flower production end up in the sea, damaging reef ecosystems. More on the Sea Walls Project. 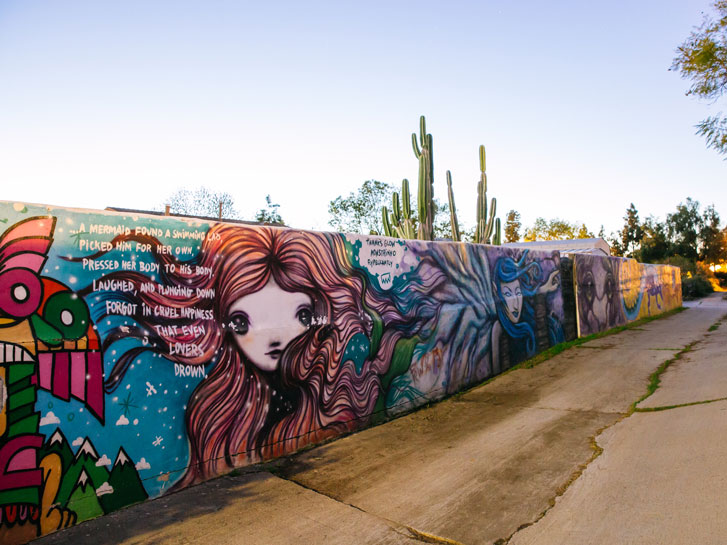 Year of the Rooster

South of City Heights, one of San Diego's most ethnically diverse communities, is the neighborhood of Azalea Park, home to artists and other creative types. Several years ago the residents created the city's first water conservation garden, tucked into the southeast corner of Azalea Community Park. Agaves and lavender complement whimsical sculptures, while brickwork paths and benches encourage lingering. Venture a few steps further south and you'll see the latest artwork by Gloria Muriel, known as "Glow," whose art can be found throughout San Diego and Tijuana. "Year of the Rooster" is on a mural-covered wall that wraps around a house, and was a collaboration with her partner, photographer Alex H. Banach, and muralist Michael Amorillo. Muriel, who frequently incorporates nature into her paintings, says "Rooster" reminds us to wake up and pay attention to what's happening in the world. (Fun fact: It's also inspired by the homeowner's chickens.) Before you leave, swing by 4133 Poplar Street, a community center known for it's eye-popping street art. 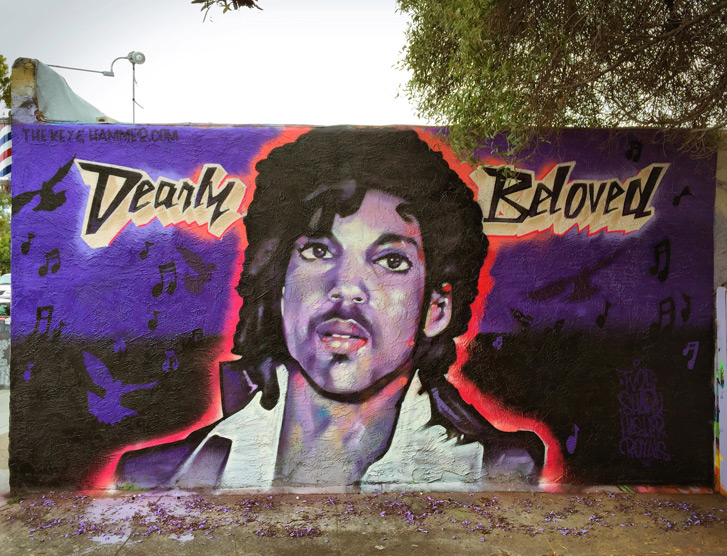 Adams Avenue is the kind of place where dive bars and yoga studios happily coexist, and "pet-friendly" is assumed. The avenue connects three neighborhoods — University Heights, Normal Heights and Kensington. Normal Heights is the most bohemian, earning the nickname "Abnormal Heights." Lestat's Coffee House is a popular meeting spot and landmark. It might hold the record for having more local artists on the walls (and in the comfy chairs) than anywhere in town. A few blocks away, on the side of Dink's Barbershop, is a mural that artist Travis Crosby painted as a tribute to Prince. Across from it is a collaboration between Crosby and his childhood friend, Kevin Lindholm, who goes by WaistKnot. Continue west on Adams Avenue and you'll see a Crosby mural of Jimi Hendrix. It's on the side of a building that holds a tattoo shop and guitar repair. Did we mention "bohemian"? 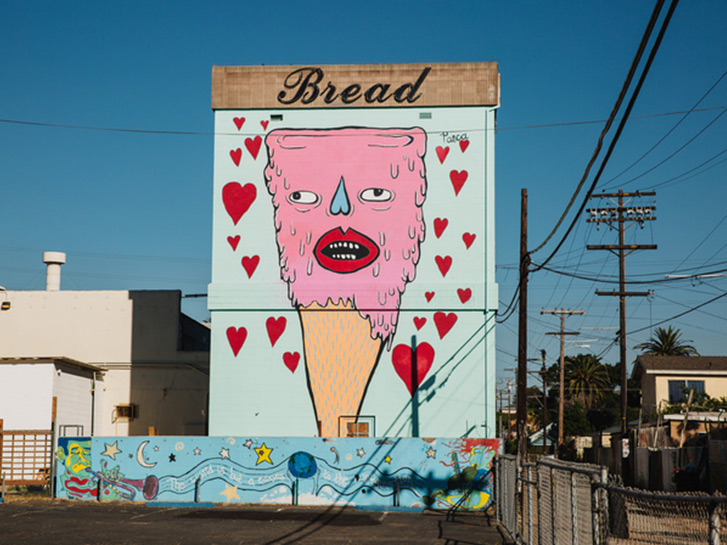 Most of the Barrio Logan arts action takes place on the west side of I-5, around Chicano Park. That footprint expanded with the opening of Bread & Salt, located on the east side of the freeway. Experimental galleries and artist’s studios are housed in a rugged industrial space, built in 1891 as a bread factory. The 40-foot flour silo provides the backdrop for the latest mural by San Diego/Tijuana artist Paola Villaseñor, who goes by Panca. “La calors” (“The heat”) honors the neighborhood ice cream vendors, or paleteros. Having just finished a political piece, Panca wanted to reconnect with joyful aspects of barrio life and modern Chicana identity. Using a deceptively simple palette, she reveals artistic influences that range from the para-surrealist painter Remedios Varo Uranga to Mr. Rogers. 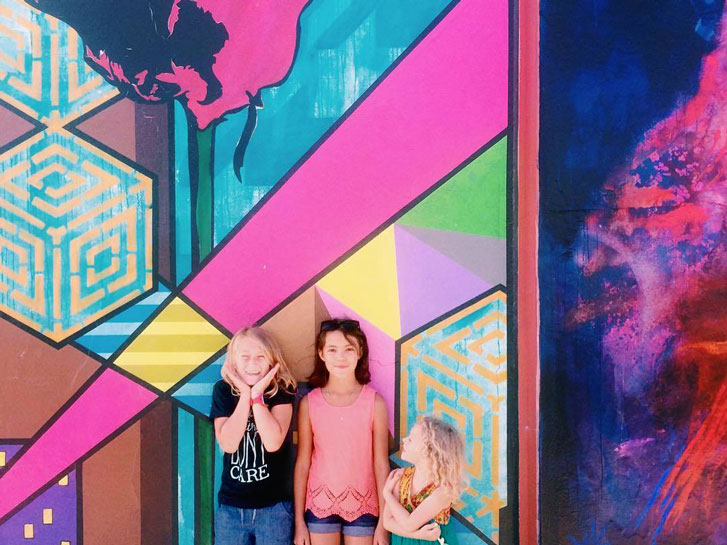 North Park is one of the area's most well known arts districts, anchored by the galleries and shops along Ray Street, alternative art space Art Produce, gallery/retail hybrids like Pigment and Visual, and live music and theater at the Observatory North Park. And from buildings to utility boxes, it has a wealth of street art. Local favorites include a 50-foot pink dinosaur by Mark Paul Deren, who goes by Madsteez, on the north end of Ray Street, and a group of murals on the side of art gallery/studio space The Studio Door. These happy kids are posing in front of a piece by artistic duo Monty Montgomery and Jason Feather, who call themselves Kreashun. 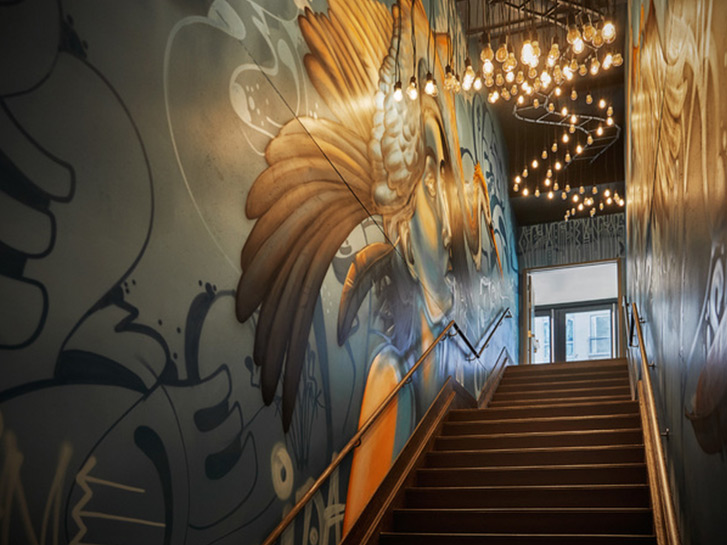 Ealey, Konecki and Burke are part of the Cohort Collective, seven prolific muralists who've created some of the most distinctive images around town. This artwork presented an unusual challenge: collaborative painting in a stairwell. The artists had to use scaffolding at various heights, constantly maneuvering themselves into position while layering over each other's work. Konecki called it “painting while on a StairMaster.” Burke contributed the graffiti-style tags, Ealey did the female characters and Konecki added the massive birds. The end result fits the sophisticated vibe and boisterous attitude of The Oxford Social Club, located underneath the Pendry Hotel, a new highlight in the Gaslamp Quarter. 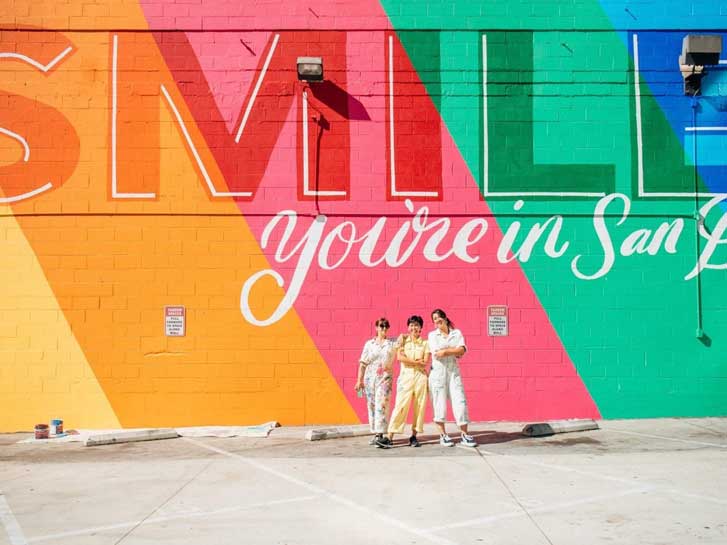 A random pop of color amidst the neutral canvas of a cityscape is bound to evoke a smile from anyone, especially when those bright colors are accompanied by huge 22’X54’ letters that read “SMILE.” This colorful burst of cheer is not just a beautiful backdrop for a fun-photo on your trip to San Diego, it’s also an accurate representation of the essential essence that is San Diego. #happinessiscalling

A Little Bit of Americana in San Diego

With state-of-the-art projectors and San Diego’s average 70 degree weather, drive-in theatres offer the perfect setting for a night at the movies.

A great place to spend the day exploring

Located adjacent to Downtown San Diego along the Big Bay, San Diego's Embarcadero is a testament to the region's colorful maritime history complete with historic ships, museums and harbor tours, as well as a working fishing harbor, cruise ship terminal and plenty of hotels, restaurants and shops.

Enjoy a three-course menu of LAVO favorites. Available all night every Monday-Wednesday. Visit our website to view the menu and make a reservation.

Make it a memorable night of culinary and performing arts!  Enjoy 20% off a pre-show dinner at Bronze Bird, located only 1 block to the Balboa Theater and a short 5-minute walk to Civic...

Save $5 and hop aboard a Flagship luxury yacht to have an amazing San Diego brunch cruise experience. Use Coupon Code at Checkout: SDTABRUNCH5

Opening a window to San Diego's past, the Gaslamp Quarter Historical Foundation showcases the history of the Davis-Horton House built in 1850, as well as walking tours of the historic Gaslamp Quarter.

Long before becoming a culinary hotspot, Little Italy was home to generations of Italian families who made their living as fishermen. Now the past mingles with the present with top chefs opening...