Bright, bold and breaking the rules

From a garden of fantastic creatures to a casually elegant bar and restaurant, this international artist left her mark on San Diego

Sunlight, color, sea breezes—the same natural beauty that draws visitors to San Diego once served as a lifeline for artist Niki de Saint Phalle. In return, she left a legacy of jubilant sculptures across the region, from a garden honoring the mythical queen of California to a playful dragon in Balboa Park. In fact, San Diego County has one of the highest concentrations of her public artworks in the world.

Saint Phalle was born on October 29, 1930 in Neuilly-sur-Seine, France, raised in New York City, and lived in Europe and the U.S. Self-taught as an artist, she gained prominence in the 1960s as the only woman in the New Realists, a group of French avant-gardists that included Yves Klein and Christo. Many of her early works were political and confrontational, especially the “shooting paintings” created by firing guns at plaster sculptures built with hidden bags of paint. In 1965, inspired by a friend’s pregnancy, she began making “Nanas,” exaggerated female figures that were both celebratory and menacing, protective and vulnerable. 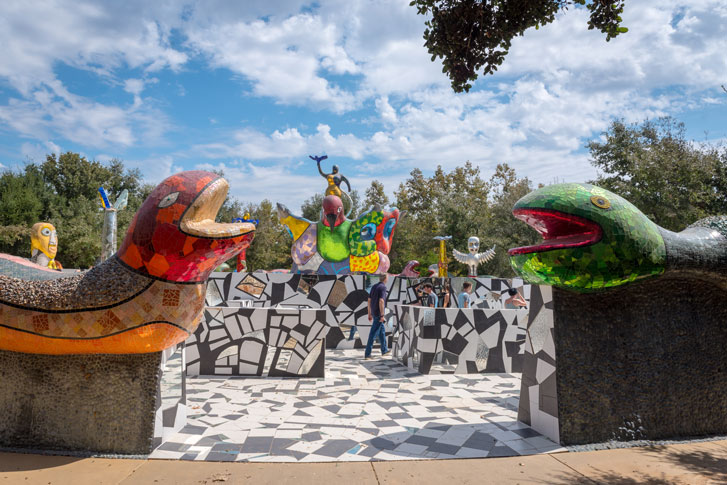 In the early 1990s, despondent after the death of Jean Tinguely, her second husband and artistic collaborator, and wracked by poor health, Saint Phalle moved from New York to San Diego. She called it her “resurrection.”

"California has been a rebirth for my soul and an earthquake for my eyes," she said. "The sea, desert, mountains, wide-open sky, the brilliance of it and the vastness of space. I have embraced another way of life and have let my discovery of this land manifest itself in my work."

In 2000, she began work on Queen Califia’s Magical Circle, which would be her only sculpture garden in America. It’s located in Escondido’s Kit Carson Park, approximately 45 minutes from downtown San Diego, and surrounded by 12 acres of parkland. 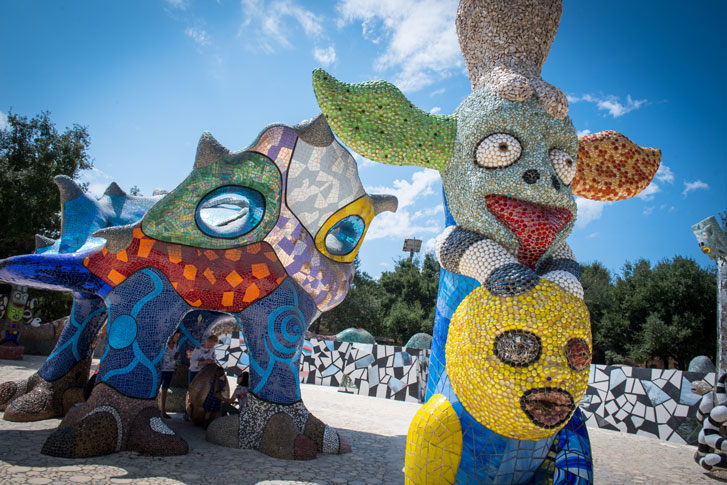 ENTERING THE MAGICAL CIRCLE - THE SNAKE WALL AND MAZE

The garden's outside diameter measures 120 feet and is encircled by an undulating wall topped by slithering serpents. The Snake Wall has one entrance — a maze-like passageway of black, white and mirrored tiles. This gateway "announces that you are crossing a threshold into a new magical world — the world of your past, your roots, your land, your unconscious dreams," said Marcelo Zitelli, the artist's curator and longtime assistant.

Inside the circle, totemic sculptures range in height from 11 to 21 feet and depict deities, monsters, animals, humans and geometric shapes. Saint Phalle drew on regional history and culture, supplementing it with her fertile imagination.

At the center is the legendary black Amazon queen, Califia, who was believed to rule a terrestrial island paradise. The imposing mosaic is an archetype of power and strength, clad in shining gold armor and reaching 24 feet into the sky. She holds a small bird aloft while standing astride a massive eagle. Underneath is a small domed "temple" decorated with cosmic symbols and ceramic plaques that were originally designed for Saint Phalle’s lifework, The Tarot Garden in Italy. A golden, egg-shaped fountain occupies the middle of the space, a reference to Califia's magical reign over the oceans and Saint Phalle’s frequent themes of birth, death and transformation.

The interplay of light and reflection creates a visual tapestry, continually transforming the garden, but it’s a tactile delight as well. Saint Phalle chose dozens of varieties of glass in differing shapes, hues and translucency, along with polished and tumbled stones such as travertine, agate, quartz and turquoise. Although it was designed to be touched, years of enthusiastic hands have taken a toll and portions of the garden are undergoing restoration.

Saint Phalle passed away on May 21, 2002, at the age of 71. Her family and assistants finished the project, and Queen Califia’s Magical Circle opened to the public in late 2003.

The garden is open on Tuesdays and Thursdays, and the second Saturday of each month. Admission is free, and docents are on hand to answer questions on Saturdays. Check the website for hours and directions, or call (760) 839-4000. For safety, the garden is closed during rainy weather and may remain closed for 24-48 hours afterwards.

Following your tour, it’s a short drive to the California Center for the Arts, home to Saint Phalle’s “Grande Step Totem” and “Seals.” 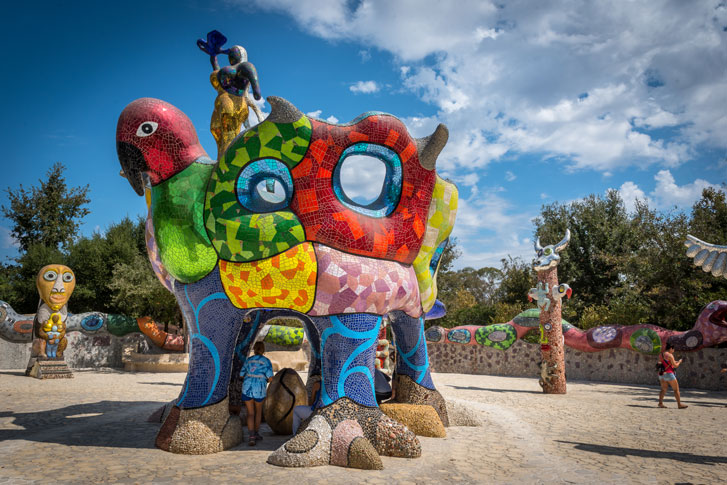 If your schedule doesn’t allow a trip to Escondido, there are other places to see Saint Phalle’s work. Her towering “Sun God” is a revered landmark on the UC San Diego campus, appearing on shirts and mugs, and honored each spring with a festival. It was the first piece commissioned by the Stuart Collection and her first outdoor commission in America. To this day, Saint Phalle is one of a small group of female artists known for creating art on a monumental scale.

Three sculptures are located at Waterfront Park, the family-friendly open air plaza along the North Embarcadero in downtown San Diego.

Southeast of the San Diego Convention Center you’ll find “Coming Together,” from her limited series called “The Skinnies.” Saint Phalle intended this sculpture to integrate diverse elements of the city’s identity. She wrote, “The windows in the head allow us to see nature and the sea; representing an awareness of our surroundings. The mirrors will give, like the wheel of life, a sense of perpetual movement. Each time of day will (be) reflected in the mirrors. The sunset, the sunrise.”

Perhaps the most intimate place to get to know Saint Phalle’s life and work is at Barbarella Restaurant in La Jolla. Owned by Barbara Beltaire, a dear friend of the artist for more than two decades, Saint Phalle’s distinctive style is seen in the graphic design, pizza oven, and a vase filled with gladiolas above the open-air bar. Beltaire jokes that Saint Phalle wanted to cover everything in mosaic and, “if Niki had had her way, my whole restaurant would have been Niki.”

Each year, to mark the artist’s birthday, Beltaire brings in pieces from her personal collection. Beltaire has many stories about her “unofficial godmother,” describing how much pleasure Saint Phalle derived from watching children climb over the “Nikigator,” and how she finally achieved happiness in the last phase of her life.

“She was really celebrating her art, her generosity to the community,” says Beltaire. “She was full of life, very passionate at every level. Not just her art but her kindness to people, and her interests. She loved life.”

Balboa Park is one of the most widely photographed destinations in San Diego, and for good reason: It's simply stunning!

A truly beautiful way to spend a day

Encompassing a good portion of the city's most outstanding attractions, taking San Diego's 59-mile scenic drive is a beautiful way to spend a day.

Join us every Monday-Friday from 5-6:30pm for Aperitivo featuring sips & bites starting at just $6! Available in our bar & lounge only, on a first come, first serve basis. Visit lavosd.com...

Celebrate 2023 with 23% Off Shadow or not, we're predicting huge savings on your next spring San Diego stay! Regardless of what season Punxsutawney Phil predicts, it's always sunny in...

This boat tour provides visitors with an educational tour of San Diego Bay. The 45-minute Bay sightseeing tour takes guests out on the water in a large loop first heading toward North Island and the...

Birch Aquarium is launching Oceans at Night, a first-of-its-kind event that invites a 21+ audience to experience an immersive blend of art, science and technology after hours. The new monthly series...