It's no wonder tiki is alive and well in sunny seaside San Diego - who doesn't love good food, potent rum drinks in funny mugs, and uplifting music in a tropical ambiance. Exploring San Diego's tiki culture and scene reveals that it's not just a trend or lifestyle, it's a state of mind.

Tiki Takes Off in San Diego

San Diego's tiki roots go way back to the 1950s with tiki evidence found in the architecture, art, bar scene, menus and more. And a new influx of tiki-style watering holes and eateries have recently opened their doors in San Diego celebrating this exotic lifestyle with its boozy beverages and Polynesian-inspired eats. 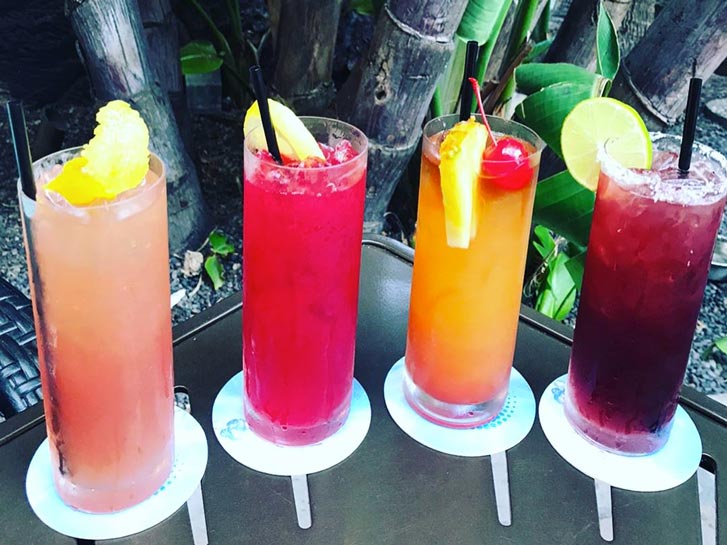 Crowne Plaza San Diego (formerly the Hanalei Hotel) in Mission Valley is another mid-50s Mecca for tiki as it hosts the annual Tiki Oasis Convention each summer, drawing the country's largest gathering of tikiphiles for pool parties and tropical fun.

The Catamaran Resort Hotel and Spa 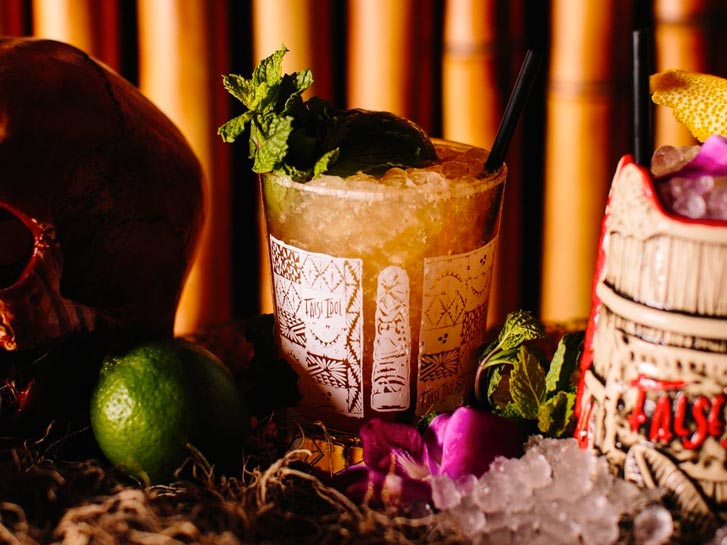 The Nolen, has a tiki menu with five colorful refreshers like their Painkiller on draft with pineapple, orange, rum, coconut and freshly grated nutmeg. Or order up an off-menu Junglebird from their spirit savant, bar lead Andrew Larson. He will create a little fire element to the rum and Campari drink by igniting cinnamon. Bar grub like carnitas-jalepeno-salva-verde flatbreads or chili-glazed meatballs over Idaho potato frites soak up the rum.

Hidden behind Pacific Beach restaurant Good Time Poke, this Polynesian-style speakeasy takes its cues from classic spots like Trader Vic's and Don the Beachcomber. Beverage director Stephen Tuttle's menu includes classics (Painkiller, Mai Tai) and original creations, like The Tipsy Tentacle (black rum, biscotti liqueur, lime, pineapple, coconut, banana). And when you order one of the three punch bowls, the whole restaurant is treated to the sounds of a tropical rainstorm.

Hidden inside Little Italy restaurant Craft & Commerce, False Idol's design is a trip. Martin Cate - the guy behind San Francisco's Smuggler's Cove - joined forces with Ignacio "Notch" Gonzalez and San Diego tiki artist Bosko Hrnjak to create an interior so full of clever details, you'll have to visit multiple times to take it all in. Consortium Holdings' head bartender Anthony Schmidt worked with Cate on a 38-cocktail menu that's part classics and part modern interpretations of classics. The menu also pays homage to San Diego tiki bars of yore, with cocktails from spots like the Barefoot Bar at Vacation Village, the Islands Bar at the Hanalei Hotel, and the Hotel Del's Luau Room.

Located in a large, warehouse-like space, Hive is a self-described "mega-restaurant." But keep an eye open for the guy behind the bar wearing a Hawaiian shirt. That's Ram Udwin, one of San Diego's finest tiki-cocktail makers (and founder of Boy Drinks World). For the first Sunday of the month, he comes up with a special menu of tiki cocktails, served from 5:00 to 9:00 PM. Stop by any other Sunday for some of his fancy rum drinks and to geek out on all things tiki.

“Miss B” is short for Mission Beach, and also a reference to the attractive woman who decades ago adorned marketing materials luring folks to San Diego beaches. While this bar and restaurant isn’t decked out in tiki decor, it pays homage to Mission Beach’s resort-town past with tropical libations like The Coconut Club (house rum mix, house orange-pineapple cordial, Coco Lopez) and The Lusca (house rum blend, guava-mango kombucha, nocello, citrus, honey, papaya).

Sexy Lounges Shake it Up

Places to see and be seen

San Diego’s low-lit lounges are where you’ll find gorgeous crowds, sexy beats and cool cocktails. Less frenetic than traditional clubs, these venues offer the opportunity for conversation while still satisfying the need to see and be seen.

Although many breweries are expanding into full-service restaurants serving food on par with their quality beers, many local bars and restaurants are equally exuberant when it comes to San Diego brews.

With year-round beautiful weather, a glittering skyline and breathtaking views, there is no better place to enjoy a libation than high atop a roof in San Diego. Luckily, a growing rank of swanky rooftop bars from Downtown to the beach invite you to have your head in the clouds while you enjoy sunsets, stars, hand-crafted cocktails, local craft beer and farm-fresh plates well into the night.

Happy Memorial Day from your friends at the Days! You deserve a getaway to sunny San Diego, which is why we're offering savings of up to 15% on weekday stays through the end of the...

GET A THIRD NIGHT FREE AT HOTEL Z

Turn your weekday into a WeekYay when you book 2 nights and get the third night free! Mix up your work week by checking into Hotel Z.  You’ll have reliable 30 Mbps high-speed Wi-Fi, ...

Treat yourself to the breakfast aromas and morning views that make our signature Bed & Breakfast package the perfect way to start your morning! For no additional cost, all adults in room enjoy...

The City of El Cajon will host fireworks on July 4th at 9:00 pm. Kennedy Park will be open for picnicking before the show.