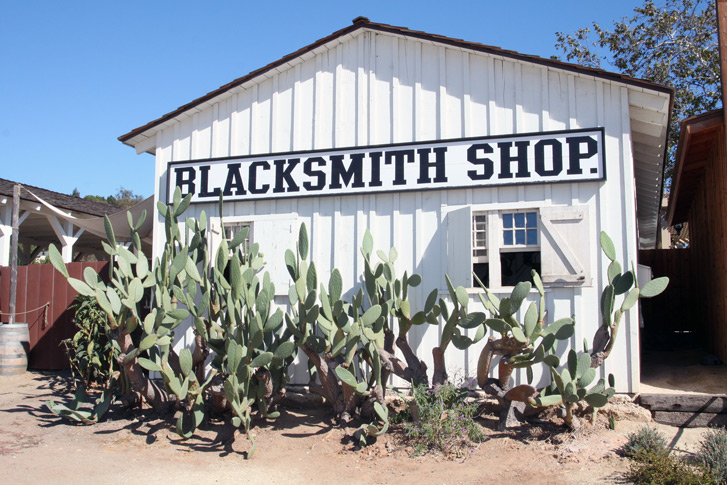 Stand on the shady porch of the Robinson-Rose House in Old Town State Historic Park and you can catch a glimpse of what San Diego was like in 1855. Where artists now set up easels in the plaza, a scrappy group of ranchers, soldiers and entrepreneurs were constructing what would become California’s second-largest city.

Old Town is where the state of California began. Home to the Kumeyaay people since 10,000 BC, the area was claimed for Spain in the mid-sixteenth century by Juan Rodríguez Cabrillo. Settlement didn’t begin in earnest until 1769, when Father Junípero Serra established the first mission at the top of what is now Presidio Hill, and Gaspar de Portolà, Spain’s appointed governor of Alta California, built the first military outpost.

Serra, a 5-foot, 2-inch Franciscan friar with a mighty will, wrote about the area, “It is beautiful to behold and does not belie its reputation.” But Presidio Hill lacked access to water, so the mission was moved upriver to its present site.

When the Mexican War of Independence ended Spanish rule in 1821, San Diego was considered a Mexican pueblo, or village. The fort was abandoned and attention turned to more accessible areas around the base of the hill. Homes and businesses began to spring up.

With the Treaty of Guadalupe Hidalgo in 1848, California became part of the United States, officially achieving statehood on September 9, 1850.

The modest village remained the hub of San Diego life until 1867, when Alonzo Horton purchased 900 acres closer to the waterfront for $265, naming it “New Town.” It would grow to become the city and county seat, now downtown San Diego. 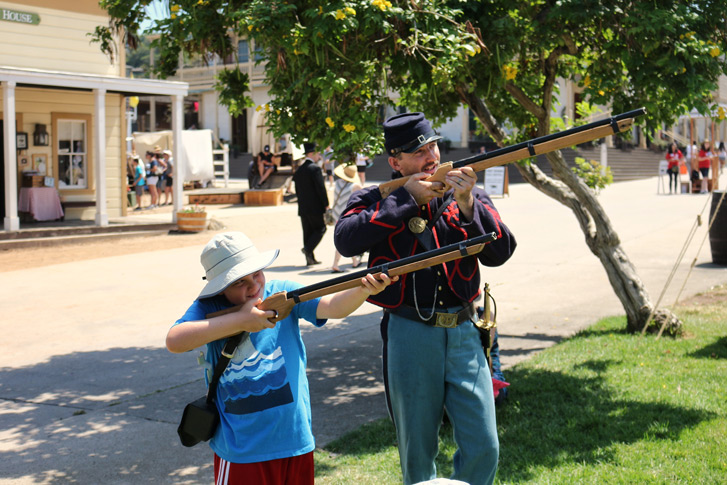 A century later, the California Department of Parks and Recreation established Old Town State Historic Park, with more than two dozen buildings depicting life from the early Mexican-American period of 1821-1872. Five original adobe structures mix with reconstructed sites and newer buildings done in the same style. A major overhaul reinvigorated the park in 2009, balancing authenticity with contemporary boutiques, restaurants and art studios. Many of the attractions are free. On evenings and weekends, take advantage of free parking behind the CalTrans building on the northwest side of Taylor Street. It’s a short walk from there to Old Town.

Make your first stop at the Visitor Center in the Robinson-Rose House, erected in 1853, demolished around 1900 and rebuilt in 1989. It was once the home of self-taught attorney James Robinson and his wife Sarah, a mysterious couple with a scandalous — for the era — past. Sarah later sold the house to Louis Rose, a German immigrant and one of San Diego’s first Jewish settlers. Over the years it heldlaw and medical offices, a jail, school, newspaper headquarters, store, boarding house and the county clerk’s office. Pick up maps and brochures, find the camel in the diorama, and sign up for a guided walking tour of the park.

Across the plaza is La Casa de Estudillo, a grand adobe home that served as the social and political center of fledgling San Diego. Built between 1827 and 1830 for José Maria Estudillo, commander of the Presidio fort, it remained in the Estudillo family for roughly 60 years. The house and courtyard functioned as a school, chapel and place of refuge for women and children during the U.S. invasion of 1846. Local legend held that it was a setting in Helen Hunt Jackson’s fictionalized book, “Ramona.” 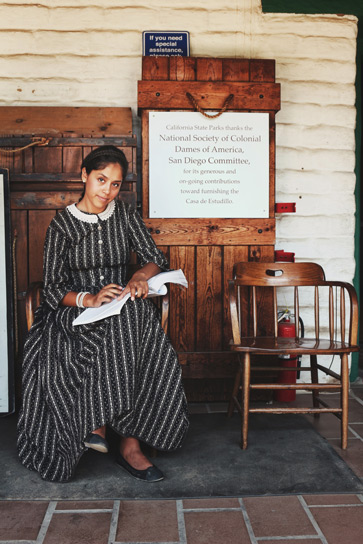 One of the original adobe buildings is the La Casa de Machado y Silvas, built in the early 1840s as a wedding gift for María Antonia Machado. Around 1854, she converted it into a restaurant to capitalize on the rush of gold prospectors, immigrants and other settlers. With a garden in the back, this could be considered San Diego’s first farm-to-table cafe!

Tucked behind La Casa de Machado y Silvas is a reconstruction of San Diego’s first publically owned school. The one-room Mason Street School, built in 1865 and restored in 1952, had an average enrollment of 42 students, though as many as a third could be absent on any given day due to the demands of ranching life.  According to the California Department of Parks and Recreation, hot issues were funding, curriculum, philosophy, tolerance and bilingual education. Popular recess activities included smoking tobacco and “roping anything that moved.” The school district was 14,800 square miles — bigger than Massachusetts and Connecticut combined — and spanned what is now San Diego, Riverside and Imperial counties.

Other highlights of the park include La Casa de Bandini, which later became the Cosmopolitan Hotel, a blacksmith and woodworking shop, the first offices of the San Diego Union newspaper, and the first courthouse. Nearby is the Whaley House, said to be one of the most haunted locations in San Diego, and the Casa del Rey Moro African Museum. Up the street are the exquisite Victorian mansions of Heritage Park and San Diego’s first synagogue, originally sited at Second and Beech Streets.

At the peak of Presidio Hill you’ll find the Junípero Serra Museum, operated by the San Diego History Center. Permanent exhibitions trace the archeological significance of the site, along with the region’s cultural influences from the Kumeyaay through the Spanish, Mexican and early American eras. On the terrace, an exhibit on the San Diego River explores the ecology and human impact over time. Climb the tower to get a spectacular view of Mission Valley, and compare historic photographs with the energetic city at your feet.

Save up to 15% off and Free Valet Parking

Show Your Badge & Save at Cafe Sevilla

Enjoy 20% Discount Off Your Food Bill at Cafe Sevilla Spanish Restaurant & Tapas Bar. Cannot be combined with any other offers or promotions or used on holidays or holiday weekends. Present this...

Tour architecturally significant structures of the period from Old City Hall to the Romanesque style Keating Building and hear the fascinating stories of the people and characters that shaped the...