Haunts from the water to the mountains

Mild autumn breezes in San Diego usually echo the region's welcoming spirit, but as the end of October approaches a spooky wind sweeps in and strange things begin to go bump in the night. From historically haunted tours to terror-filled scream zones, Halloween in San Diego is crazy fun for ghouls of all ages.

Before visiting, please check with each point of interest on their operating status based on Covid-19 safety requirements. 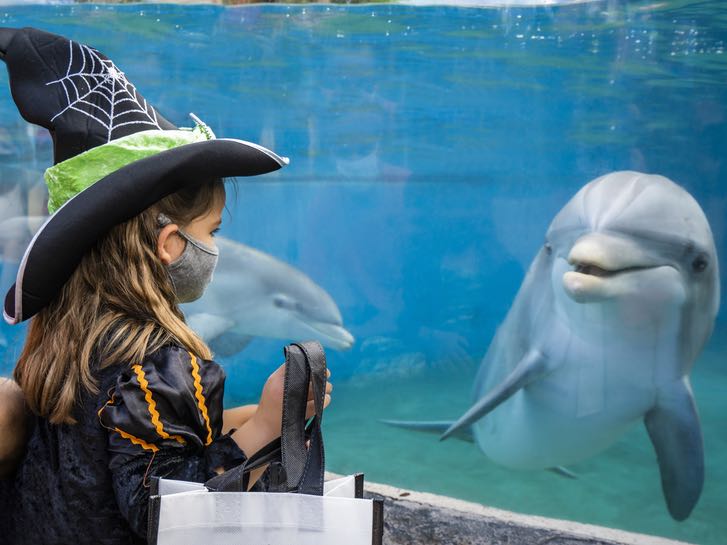 When: October 1-31, 2020
Haunted Aquarium Remix takes the spooky science fun that the traditional Haunted Aquarium is known for and mixes things up outdoors with new animal encounters and activities geared for children ages 2 to 10, as well as fun decor for the whole family.

When: October 1-31, 2020
Buckle up for a wild ride! San Diego's favorite fright fest, the Scream Zone, is taking the scares to the streets in Drive-Thru Scream Zone: Road Kill, at the Del Mar "Scaregrounds."

Step into one of America's most haunted houses and immediately feel a chill! See something out of the corner of your eye that you can't explain? Hear the sound of a ball bouncing off the wall but don't see it? During the month of October, the Whaley House usually offers extended hours and the chance for you to have an actual paranormal encounter.

Formerly known as the William Heath Davis House, this historic structure is the oldest standing building in downtown proper. This space is believed to be haunted by the patients who passed during the ten years when it served as a hospital.

Take a stroll through the Point Loma Lighthouse at the Cabrillo National Monument for the chance to experience a haunting firsthand. Visitors have reported feeling cold spots upon entering the spiral staircase and hearing strange noises throughout the lighthouse. 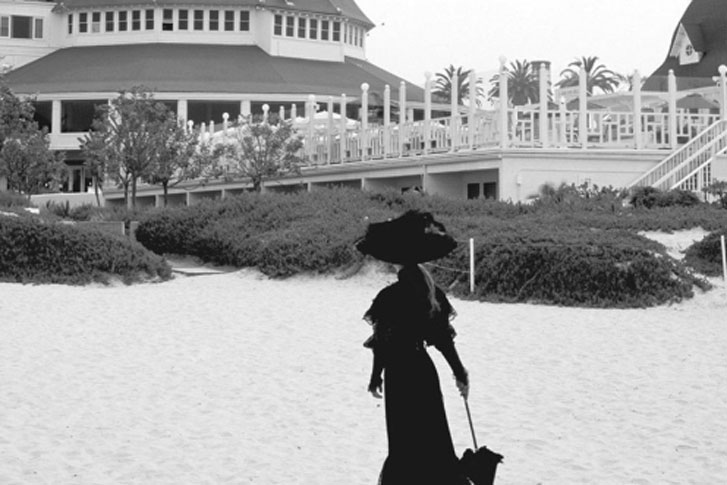 Hotel del Coronado's ghost actually has a name — Kate Morgan. It is said that the young woman checked into the hotel in 1892 and never checked out. Legend has it that her third-floor guestroom is said to experience haunted happenings like flickering lights, inexplicable sounds and shifting items. Are you brave enough to stay here?

Fans of the paranormal flock to the Horton Grand Hotel to experience the strange happenings at this vintage-inspired San Diego hotel. In the famed Room #309, it is said that guests have experienced an array of spooky experiences, including shaking beds, the sounds of footsteps in the middle of the night and the classic flickering lights. 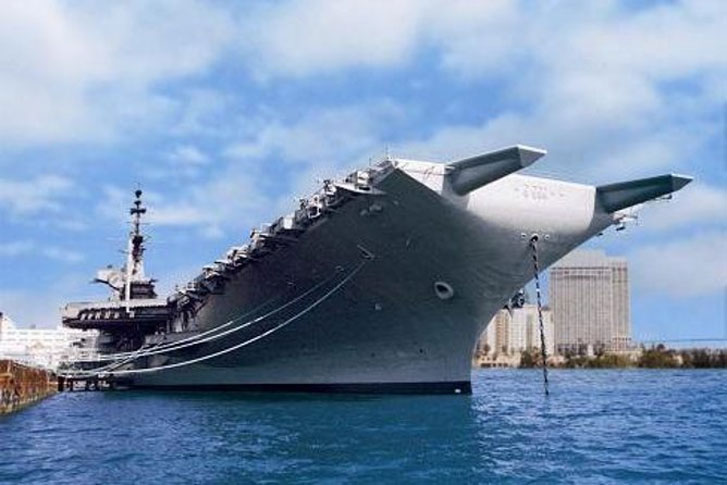 According to USS Midway Museum curator David Hanson, all historic ships are haunted, and the USS Midway is no exception. Hanson is the leader of San Diego's largest paranormal group and has dubbed the Midway as a hotbed for paranormal activity. Visitors have reported encountering ghosts and spirits of the ship's former crewmen.

The historic ferry boat started operating in the late 1800s and now resides at the Maritime Museum of San Diego. According to Jim Davis, director of marine operations, multiple past passengers are said to haunt the vessel, including The Fedora Man who walks the "Ladies deck."

Next to the Berkeley floats the Star of India, the world's oldest working sailing ship which made 21 voyages around the world before being taken out of service, and then restored in San Diego. During its time as a merchant vessel, many lives were lost. Today, visitors have reported seeing shadowy figures seen on the 'tween deck and hearing the sound of heavy boot steps and voices. 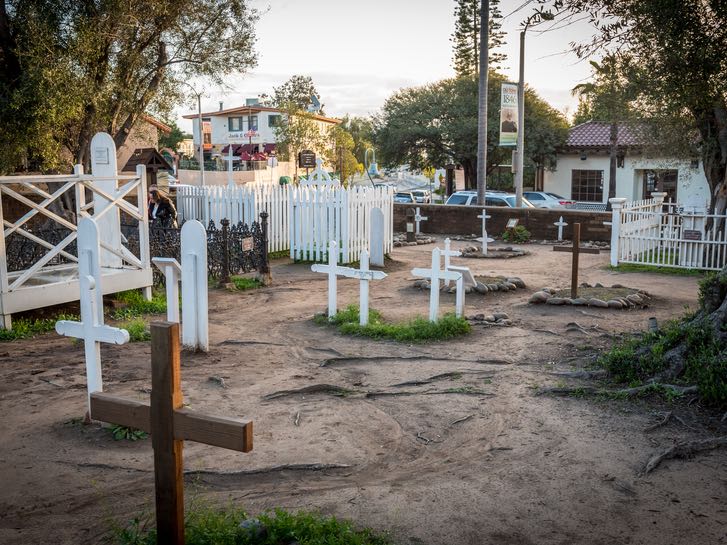 Dating back to 1849, El Campo Santo Cemetery provides a glimpse into Old Town’s past. 477 bodies are buried in the cemetery. Some of the 477 bodies are buried in the cemetery, and some lie outside its gate beneath the sidewalk and San Diego Avenue. You can spot the burying sites from the brass “Grave Site” markers. This haunted cemetery’s most widely seen apparition is a Native or Hispanic man dressed in 19th century clothing, who floats above the ground.

As the resting place of hundreds of miners struck by gold rush fever in the 1870s, this California Historic Landmark is said to be haunted by the gold town's early residents. Stick around and you just might see the town’s founder, Drury Bailey, roaming the grounds. 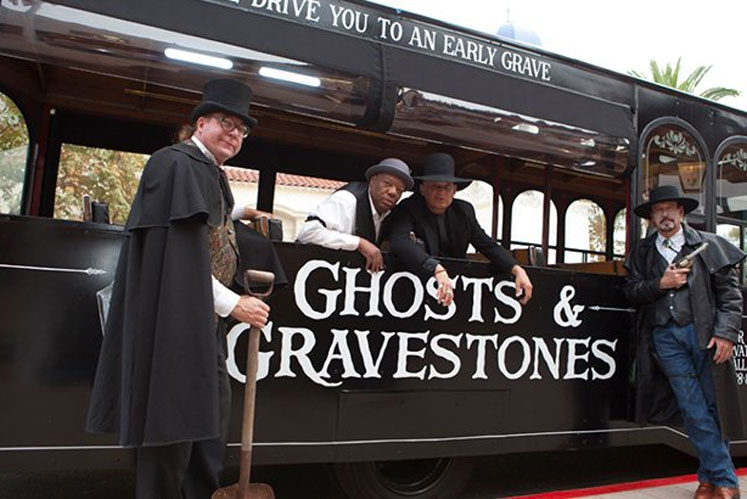 If you're looking for an off-the-beaten path experience, this 'frightseeing' tour is unlike any other. Ghosts and Gravestones provides year-round tours showcasing all the spooky spots San Diego has to offer, from historic haunted houses to graveyards and hotbeds of paranormal activity. 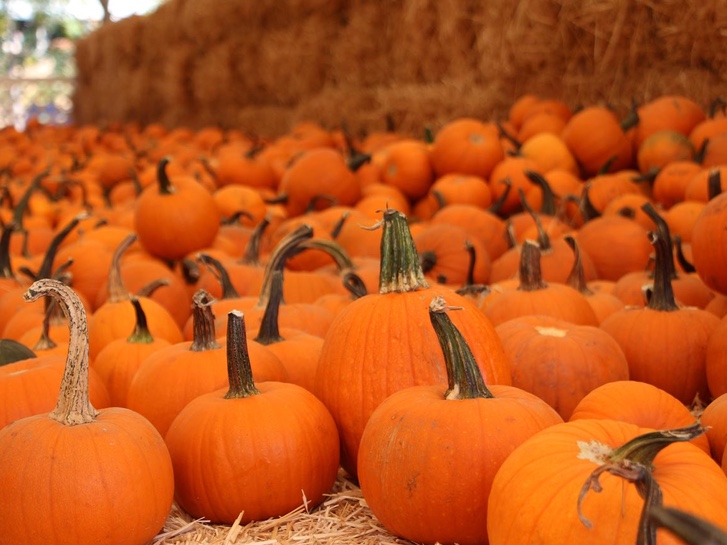 Autumn in San Diego means warm days, cool nights and, of course, pumpkin patches! Browse this list to find the perfect pumpkin patch near you.

7 Things to Do, See, and Eat in Mission Bay

From extreme sports to extreme relaxation

A gigantic aquatic playground, Mission Bay is ideal for just about every kind of watersport, from sailing and SUPing to jet skiing and kayaking. It also has 27 miles of park- and beach- lined shores which are perfect for sunbathing, playing beach volleyball, and picnicking. Cyclists and runners will fall in love with the paved, 12-mile long path that winds around the bay and along the beachfront boardwalk. With resorts, theme parks, restaurants, and 19 miles of beaches, everyone will find a few reasons to love Mission Bay. Here are just a handful of them.

Whether you consider ownership, accolades, or simply fame and fortune, the restaurant, cocktail, and beer industries are largely dominated by men. But in San Diego, there's a rising stock of female masters taking the food, beer, wine, and cocktail scene to another level. Here's a look at some of the city's top food and drink mavens, and where you can taste or sip their creations.

The best views in town

Mountains, beaches, bays, sky-scraping buildings—you better believe San Diego has some jaw-dropping scenery. Even for such a picturesque place, some spots are downright postcard-pretty. Some of these views are right off the road. Others require some work to attain. Either way, they pack in about as much of the beauty of California’s Beach City as is possible in one dramatic shot.

Howl you doin’, good lookin’? Trying to come on down to San Diego this October for a spook-tacular winery tour? If you are bone to be wild this October – keep reading:  We...

San Diego's favorite fright fest, the Scream Zone, is taking the scares to the streets in Drive-Thru Scream Zone: Road Kill, Oct. 1-31 at the Del Mar 'Scaregrounds'. The Scream Zone has been...

Haunted Aquarium Remix takes the spooky science fun that the traditional Haunted Aquarium is known for and mixes things up outdoors with new animal encounters and activities geared for children ages 2...