Clean lines, lots of light, and even one Lorax tree (kind of). These motifs characterize the modern architecture that can be found all over San Diego. From libraries in urban areas and college campuses to stunning private homes, temples, and mixed-use spaces, San Diego has so many angles to appreciate. 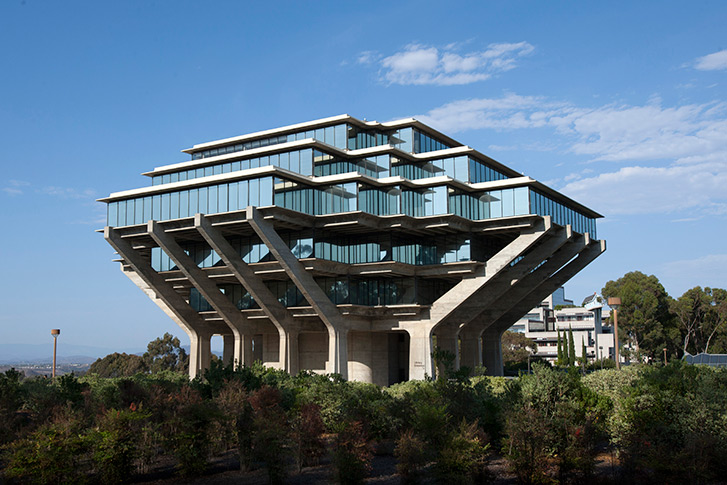 If the brutalist design of UC San Diego’s Geisel Library reminds you of a Lorax tree, it’s no accident. The school’s main library building is a tribute to Theodor Geisel—better known as Dr. Seuss—and his wife, Audrey. The eight-story building dates to 1970. Built by William L. Pereira & Associates, it houses seven million volumes including personal items, notebooks, and drawings. 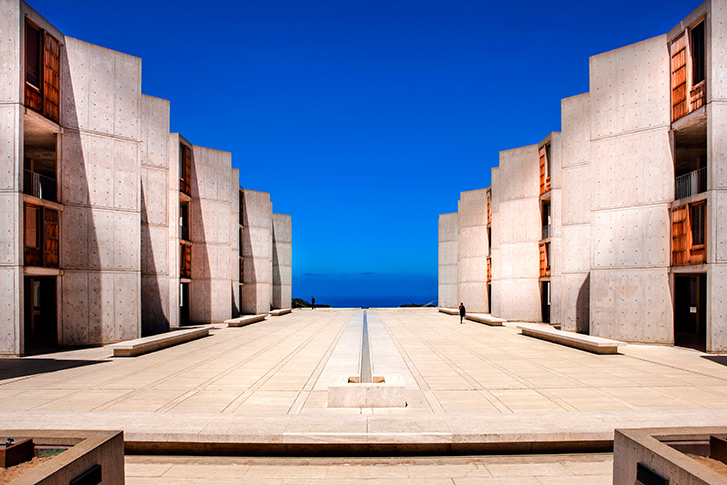 Jonas Salk, creator of the first polio vaccine, told architect Louis Kahn that in designing his namesake institute he must “create a facility worthy of a visit by Picasso.” Anyone who visits the 27-acre campus overlooking the Pacific Ocean would likely agree that Kahn succeeded in his mandate. Subtle water features separate concrete buildings accented with teak. 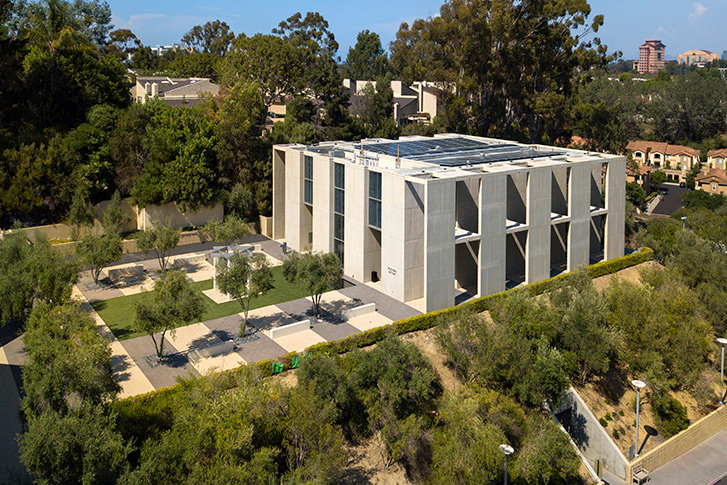 Built in 2000 by Stanley Saitowitz and Natoma Architects, this temple is a mixture of American and Eastern European influences. At every turn, light is able to penetrate the skylight, the airy exterior and even into the synagogue itself, which has been described as a “box of light.” Olive trees and a grassy lawn bring even more of a natural feel to this house of worship. 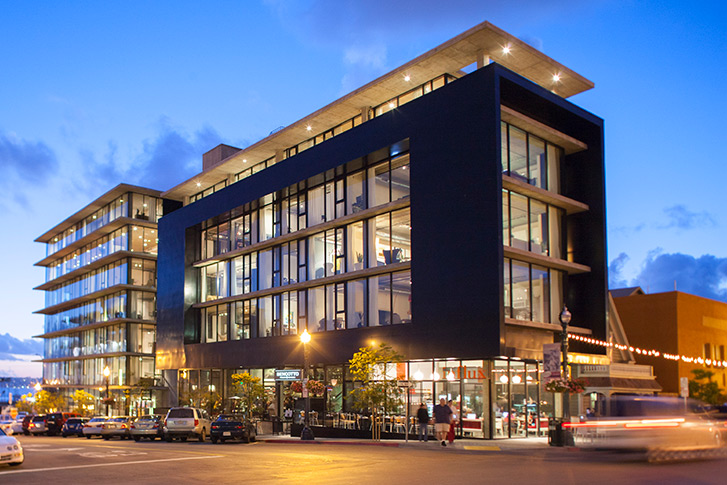 Built in 2010, this seven-story mixed-use residential, office, and commercial space was able to bring a modern touch to Little Italy while preserving the old. The structure encompasses the oldest home in Little Italy, a Gothic Victorian house from 1889 incongruously but elegantly displayed. Designed by Jonathan Segal FAIA, the building houses 27 apartments and common spaces entirely powered by solar panels on the building’s roof. 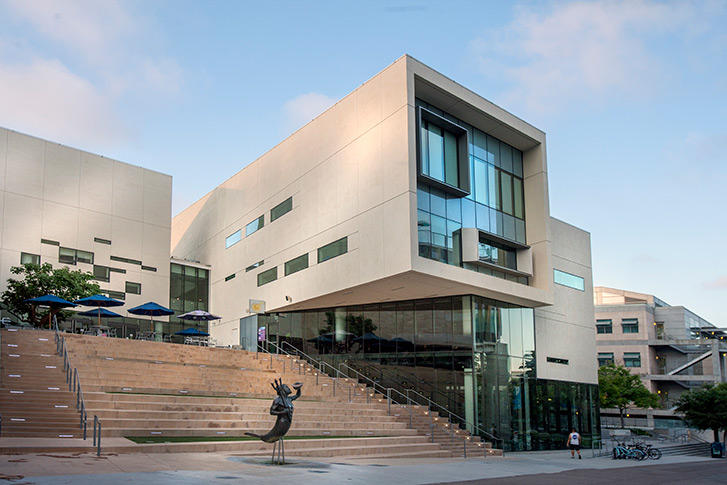 Adjacent to the Geisel Library, UC San Diego’s student center is almost as much of an eye-catcher. First opened in 1989, the Price Center has undergone expansions that have added immensely to the building’s architectural appeal. Filled with eateries, shops, lounge space, and even a movie theater, the Price Center offers something for just about everyone, not just students. 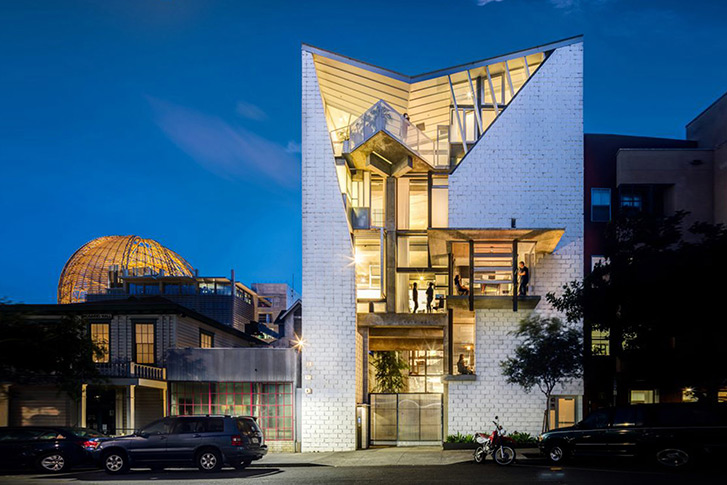 After designing San Diego’s Central Library, architect Rob Quigley decided to put down his own roots just a block away. And in 2015, Quigley and wife Kathleen Hallahan moved into their own East Village abode, which quickly became one of the most notable in all of San Diego. At just 42 feet wide, the five-story home is an excellent use of space wrapped in an inviting white-brick exterior. Though a showpiece, the home is comfortable, too. An outdoor living room is the main space, but can be closed off by enormous glass doors framing views of some of San Diego’s most iconic structures: the Coronado Bridge, San Diego Bay, and of course, the city’s central library Quigley designed. 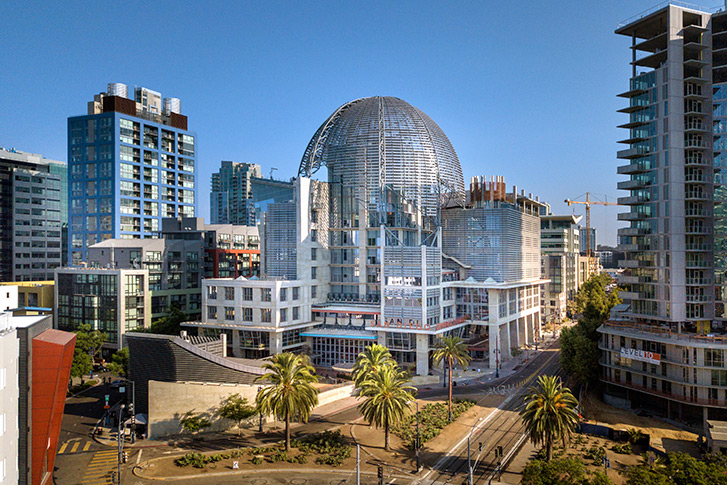 Is it a hat? An umbrella? However you interpret the steel-and-mesh lattice dome topping it, the city’s flagship library is unique, modern, attractive, and distinctive. The nine-story steel and concrete structure, designed by architect Rob Quigley and opened in 2013 is considered a masterpiece in concrete construction. The interior is no less impressive. The massive central space is defined by a gigantic arch, and floating stairway.

You can spend all day (or weekend) exploring Balboa Park's 1,200 acres of museums, gardens, and the world-famous San Diego Zoo. But the Jewel of San Diego also features several lesser-known attractions that are sure to pique your interest, too. Check out these seven hidden gems.

7 Things to Do Along

A favorite drive for locals and visitors alike, US Route 101, aka the Pacific Coast Highway, runs through San Diego beach towns along 70 miles of winding coastline from La Jolla to Oceanside. This scenic route is a great way to experience an authentic So. Cal lifestyle vibe and mix and mingle in San Diego's surf culture. Here are seven spot worth checking out along the way.

in Mission Valley and Old Town

For those who seek variety in their days, the area between I-5 and I-805 just east of downtown has something for everyone. From Old Town's historical sites to the high-end shops at Fashion Valley Mall, there is no shortage of things to see, eat, and experience. Start with this list and see where Old Town and Mission Valley take you!