Scroll through your favorite social media app and you’ll undoubtedly see at least one smiling subject standing in front of a multicolored wall or dancing to the tunes of live musicians. In San Diego, there are boundless opportunities for capturing compelling snapshots. This Southern California gem is sprinkled with towering murals, vibrant mosaic sculptures, and lively concerts and festivals. Use this guide to tour the most picture-perfect arts and culture offerings in and around San Diego. 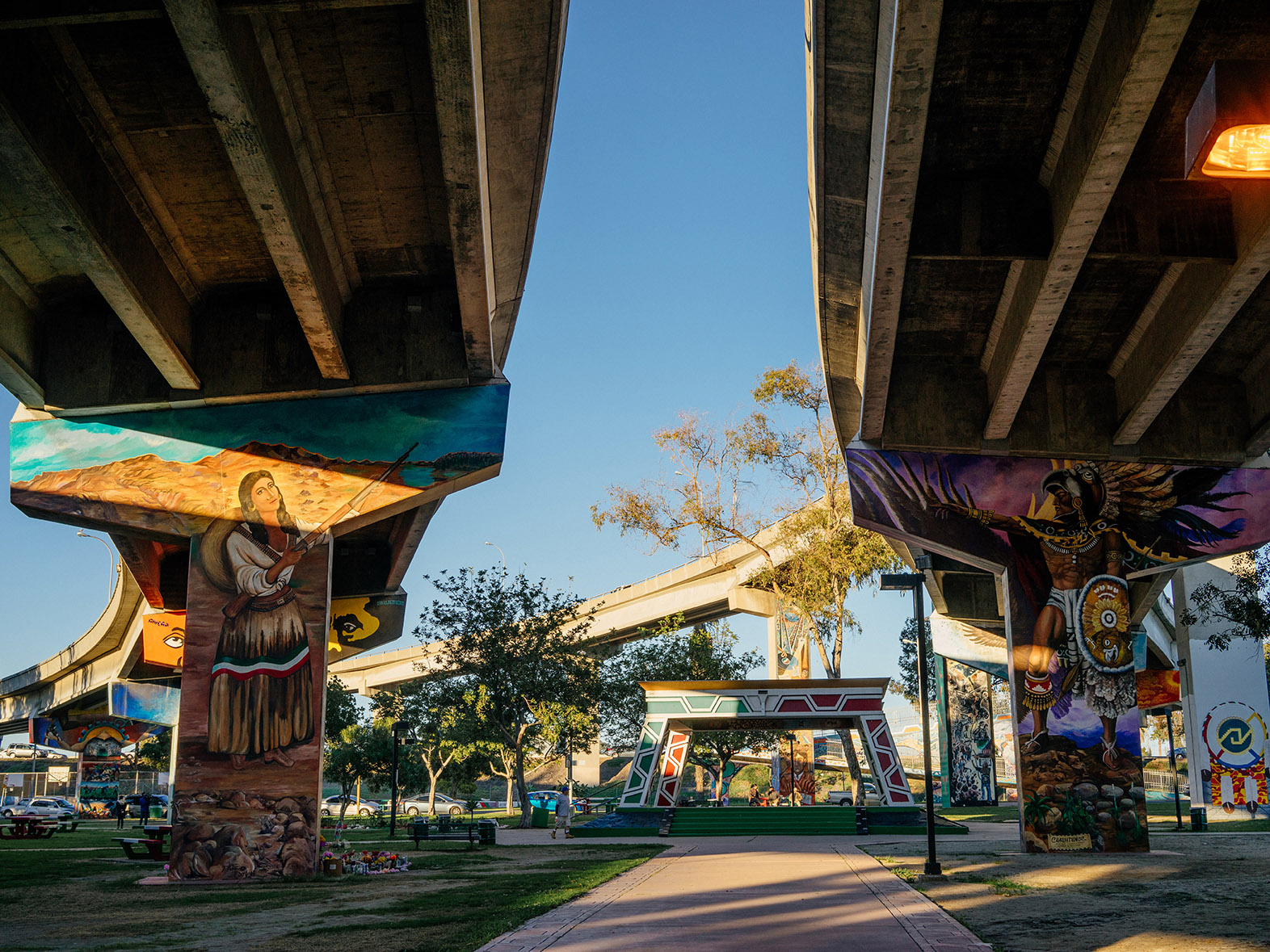 There’s more than water under San Diego’s Coronado Bridge. In fact, the artwork on the underside of the structure represents the city’s colorful history and culture. Chicano Park, the largest assembly of outdoor murals in the United States, is a collection of Chicano paintings that pays homage to San Diego’s Mexican-American roots. The site was founded in 1970 when Chicano activists joined together to protest urban construction that would have compromised the integrity of their neighborhood. It was recently named a National Historic Monument, making it one of the newest sites in the country to receive this designation. 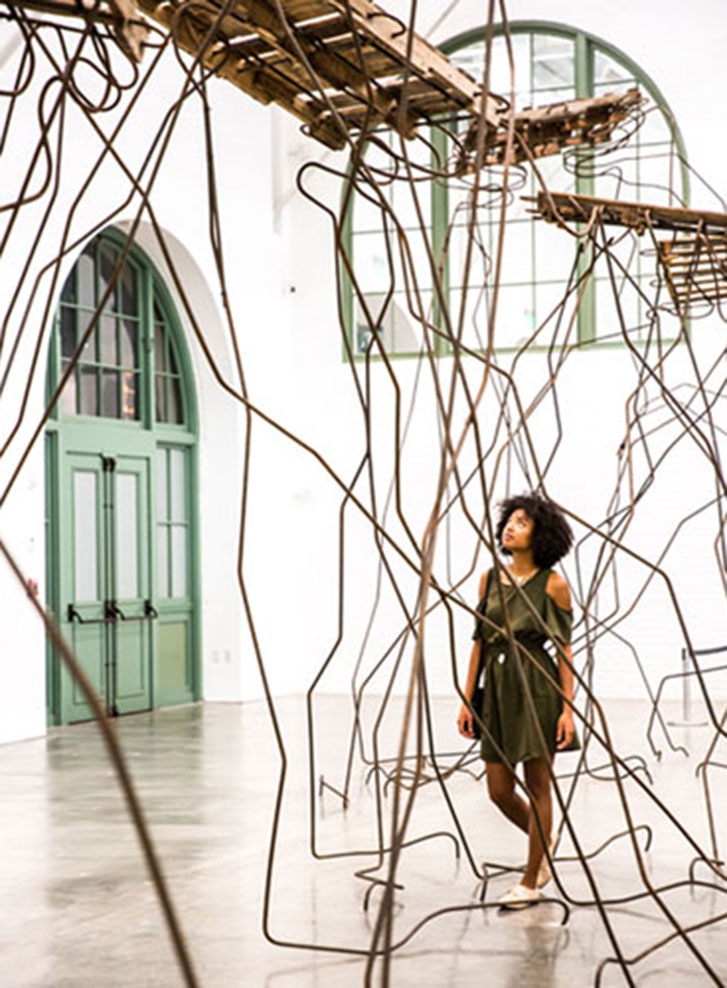 Prepare yourself for a sensory overload. The collections at the Museum of Contemporary Art San Diego (MCASD) include cutting-edge installations that manipulate viewers’ perception of sight and sound with multimedia elements—like video and music—and immersive special effects. The MCASD has an internationally recognized collection and a dynamic schedule of exhibitions and public programs for all to enjoy. 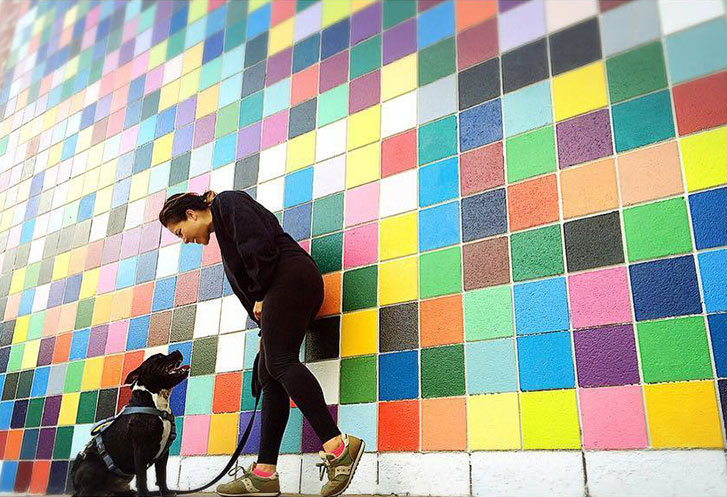 On a walk through La Jolla, an affluent neighborhood along the coastline of San Diego, you’ll encounter sweeping views of the Pacific and could spot the resident sea lions or harbor seals sunning on the rocks. But a contemporary art installation, Murals of La Jolla, is adding creative flair to the already scenic area. Local and internationally renowned artists dreamed up and created the colorful murals on buildings in the community. Follow the map to visit the 16 on display now. 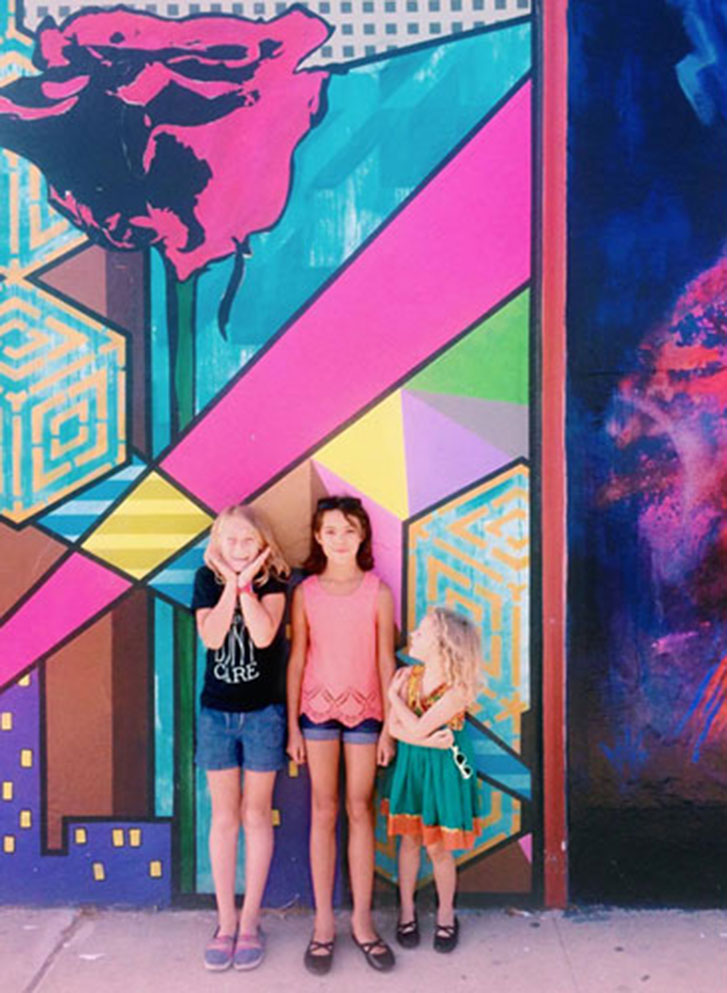 Dotted with galleries, murals, and creative shops, North Park has emerged as one of San Diego’s most picture-perfect neighborhoods. Explore the community on the second Saturday of the month for Ray at Night, an evening art walk where galleries stay open late, local musicians perform live sets, and food trucks serve up favorite San Diego cuisine. 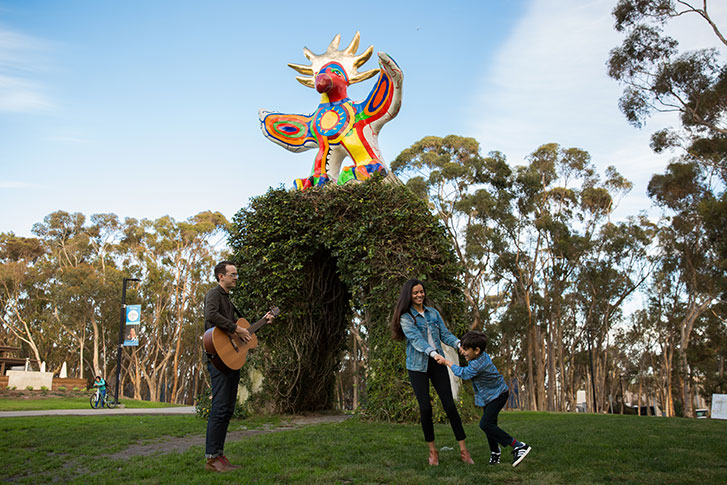 Even if you’re not hitting the books, don’t miss a visit to the scenic campus of the University of California, San Diego. Set on 1,200 acres above the Pacific Ocean, the school grounds are home to the Stuart Collection, an assortment of contemporary art works on public display. Download the map and take a walking tour to view the collection, which includes works like Sun God, a 14-foot bird statue that sits atop a lush concrete arch. 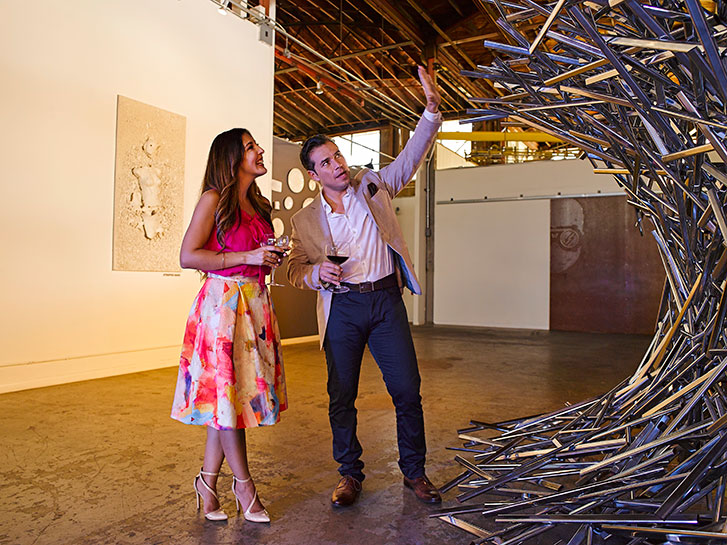 A colorful neighborhood on the southern end of the city, Barrio Logan attracts hip and progressive artistic influencers. This community is a creative hub where painters, sculptors, writers, and designers can gather to grow, learn, and collaborate. Galleries like La Bodega are collectives where up-and-coming visionaries can share their works with the public. Go for the gallery hopping, and stay for authentic Mexican food at the neighborhood’s eateries. 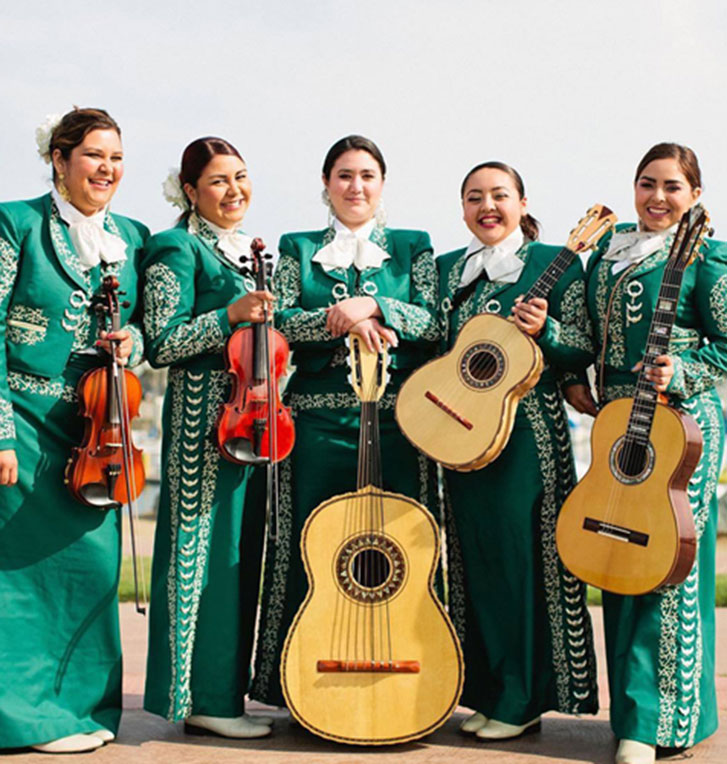 In Old Town San Diego, the sounds of mariachi music and scents of authentic Latin cuisine remind residents and guests that Mexican culture is a huge part of life in San Diego. Visit for one of the community’s lively festivals, or explore Old Town State Park’s numerous sites and living history demonstrations. 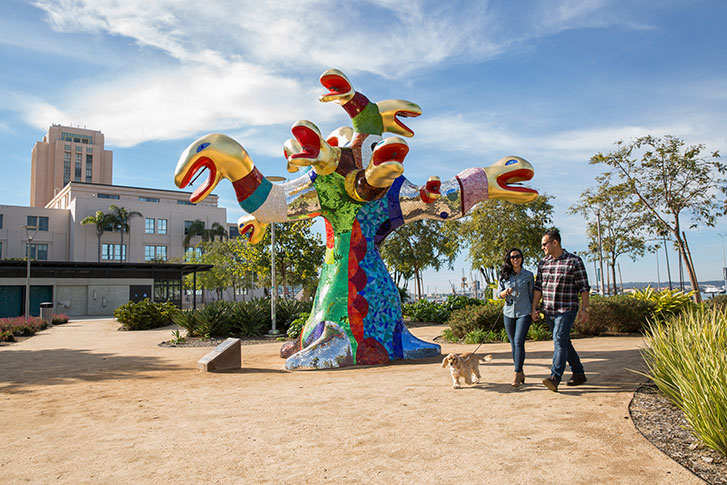 At San Diego County’s Waterfront Park, kids can play in fountains and on jungle gyms while adults relax and enjoy views of San Diego Bay. Art lovers congregate around three mosaic sculptures by Niki de Saint Phalle, vibrant works that were unveiled at the park in 2015. 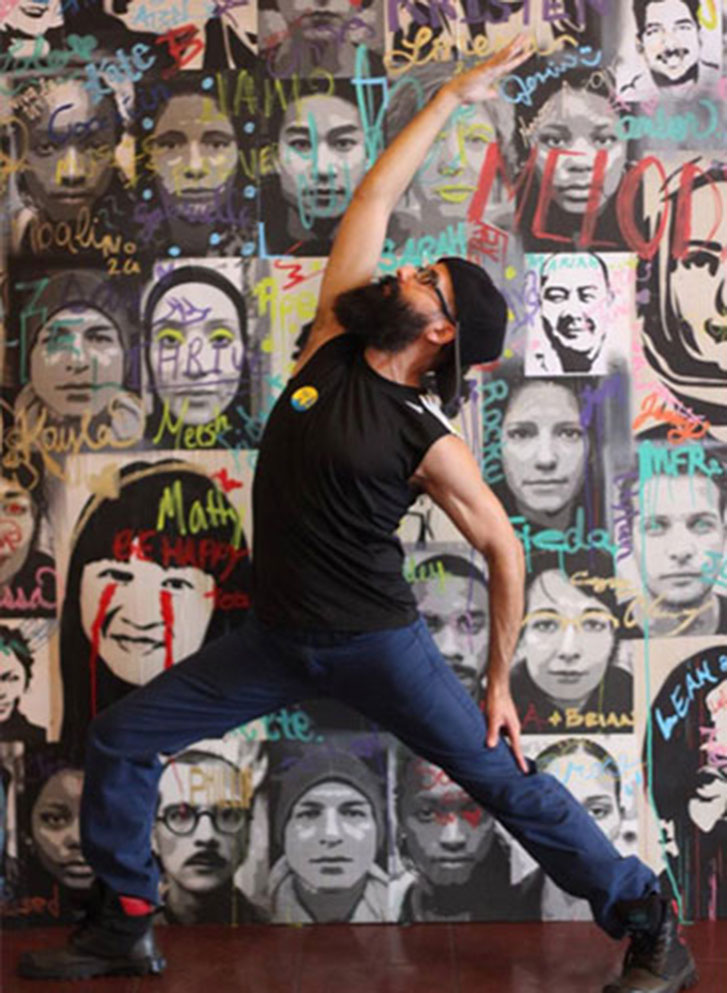 The San Diego Museum of Us proves museums are as much about human connection as they are about admiring artifacts. One of the 17 museums at San Diego’s Balboa Park, the institution examines the many sides of human existence. Exhibits and installations chart man’s early evolution and study the challenges experienced in modern society. 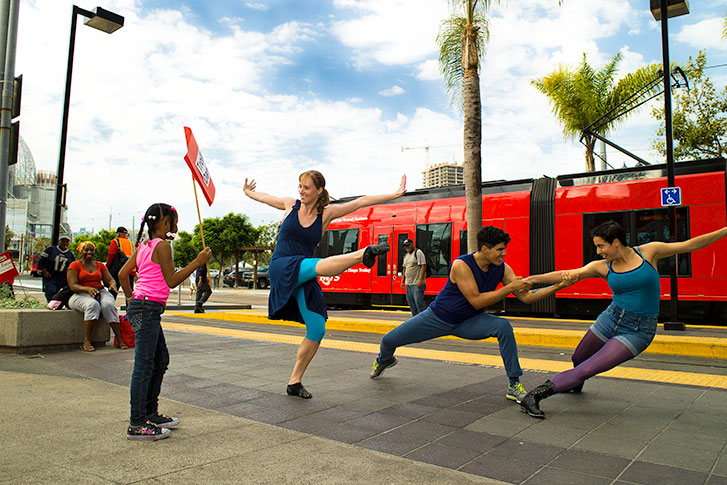 Live theater is nice, but what if you could take in a performance on the go? Each September, the San Diego Dance Theater hosts Trolley Dances. To participate in this immersive experience, patrons board the San Diego Trolley and enjoy energetic and funny performances at stops from Barrio Logan to Fault Line Park.

Ever since Spanish ships first sailed into the natural harbor under command of Portuguese explorer Juan Rodriguez Cabrillo in 1542, San Diego Bay has played welcome host to visitors.

With nearly perfect weather year-round, most visitors to San Diego want to spend as much time outdoors as possible. Fortunately for art lovers, San Diego’s great outdoors also happen to be home to vibrant artworks by internationally renowned artists. Make a day (or two) of hunting for these famous sculptures around San Diego.

Save $3.00 off Admission to the Maritime Museum

Come and explore our connection with the sea at the Maritime Museum of San Diego! Spanning 500 years of seafaring history, your visit to the Museum will give you a chance to step aboard an historic...

Save 10% off any San Diego Walks Tour

We offer tours of Balboa Park, Old Town, Liberty Station and Coronado. Use code BEST10 at time of booking to save 10%

Purchase general admission to the Maritime Museum of San Diego and add a 45-minute narrated Historic Bay Cruise aboard the country's oldest active Pilot boat for only $10 more! Limit reservations....

The Mt. Soledad National Veterans Memorial will honor Marine Corps Major Megan McClung, and our nation's heroes through a live and virtual tribute event on 30 May 2021 from 11 a.m. to 12 p.m. (PDT)...

For more than 39 years, Twilight’s live music under the stars has been delighting visitors. Twilight in the Park Concert events ARE scheduled to return this summer starting Tuesday, June...