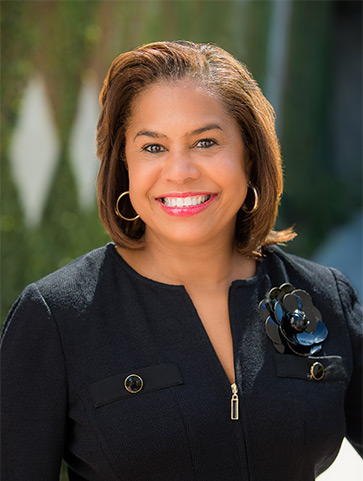 Previously, Coker served as the president & CEO of the Philadelphia Convention and Visitors Bureau (PHLCVB) where she oversaw the 2017 NFL Draft and the 2016 Democratic National Convention, which had a combined economic impact of $325 million for Philadelphia.  Prior to that, she was PHLCVB’s Executive Vice President, Convention Division, and managed a staff of 25 sales and services professionals responsible for selling the expanded Pennsylvania Convention Center and hotel packages to customers across the country.

Prior to joining the PHLCVB, she was the general manager for the Hyatt Regency Philadelphia at Penn’s Landing, where she oversaw all operational aspects of the 350-room hotel. A 21-year Hyatt veteran, she began her career in 1989 as a corporate management trainee at Hyatt Regency Columbus. Throughout her more than two decades with Hyatt, she rose through the ranks in a variety of positions, including assistant front office manager, front office manager, hotel assistant manager, assistant executive housekeeper and general manager.

From January 2018-2020, she served as co-chair for U.S. Travel’s Meetings Mean Business Coalition and secretary-treasurer for International Association of Exhibitions and Events Executive Committee (IAEE). From 2016-2019, Coker co-chaired the Shared Spaces Initiative to combat homelessness with Philadelphia’s Mayor, and in 2016, she served as the chair of Mayor Jim Kenney’s transition team for the Democratic National Convention.

Additionally, Coker is a member of the Philadelphia Chapter of The Links, Incorporated. In both 2012 and 2019, the Philadelphia Business Journal named her among their Women of Distinction honorees. She was the 2017 United Negro College Fund Mayor’s Ball Honoree for Civic Leadership and was named one of the Network Journal’s 25 Most Influential Black Women in Business. She also received the Cradle of Liberty Good Scout Award by the Boy Scouts of America Cradle of Liberty Council and was the recipient of the 2011 John Wanamaker Award (Individual Award) given by the YMCA of Philadelphia and Vicinity.

Some of the most beautiful landscapes in SoCal

Coastal San Diego County is home to some of the most beautiful landscapes in Southern California. These seven hikes highlight the best of the San Diego Coast.

Get 1,000 extra bonus points for each night with Best Western Rewards. If you're not yet a member you can join when you book - it's free! Your health and safety is our top priority, although we are...

IHG® has over 5,500 hotels worldwide, and is pleased to welcome AAA/CAA members with hotel deals and discounts (at participating hotels). In addition to hotel discounts, IHG® Rewards Club...

Our Senior Discount rate is available for guests 62 years and older or with a valid membership ID of a retired person organization. Proof of eligibility required at check in. Your health and safety...

For more than sixty years, Mother Nature has transformed the rolling hills of North San Diego County into one of the most spectacular and coordinated displays of natural color and beauty anywhere in...