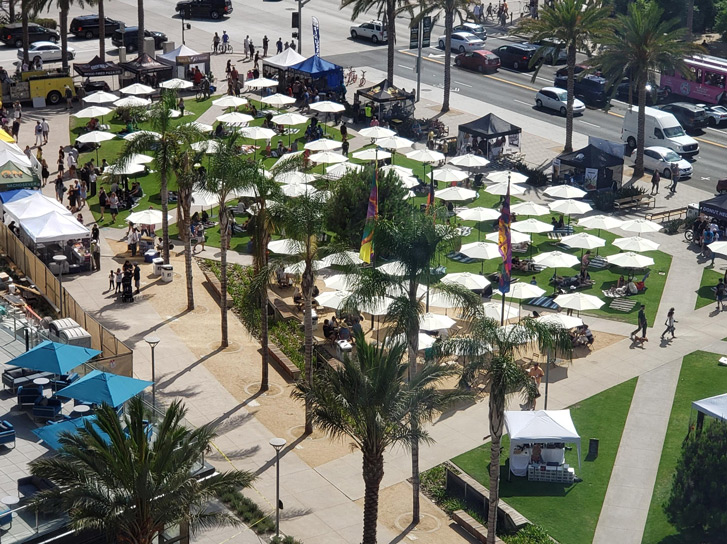 Asylum Rock Gym, which opened in April in the Logan Heights neighborhood, is a one-of-a-kind facility with an outdoor rock wall, yoga, live DJs as well as food and drink offerings. Despite the unique outdoor aspect, Asylum operates like most gyms, with standard memberships costing $60 a month and day passes costing $22.

Opened in May, Mic Drop Comedy is a comedy club in Kearny Mesa that pays homage to its 30-year-old predecessor, Comedy Palace. The club holds 90-minute stand-up shows every Wednesday through Sunday with unique programming such as boozy Sunday brunch shows, a comic hypnotist and more. Mic Drop Comedy also offers a full dinner menu and extensive cocktail offerings but with no drink or food minimum.

In May, the Hilton San Diego Bayfront unveiled its newest waterfront event space, The Pointe. Located on the ground floor of the hotel, this recent renovation features refined details with the picturesque backdrop of San Diego Bay, making it the perfect location for a variety of events and occasions.

As part of the SDSU Mission Valley campus, Snapdragon Stadium is slated to open in September. The 35,000-seat stadium will serve as the home of the San Diego State Aztecs football team as well as the San Diego Wave FC of the National Women's Soccer League and the San Diego Legion of Major League Rugby. The year-round entertainment destination will also host over 300 projected events and serve as a community hub.