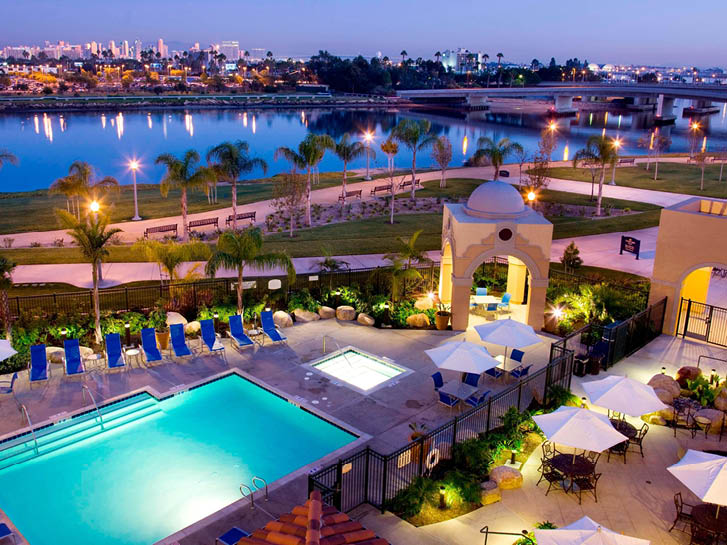 The cozy 200-room Courtyard by Marriott San Diego Airport Liberty Station is located within walking distance to ARTS DISTRICT Liberty Station, numerous restaurants, retail shops, and entertainment offerings. Set along the water and adjacent to a 46-acre park, guests can enjoy a variety of recreational activities including an outdoor pool, stand-up paddleboard and kayak rentals, and jogging paths. 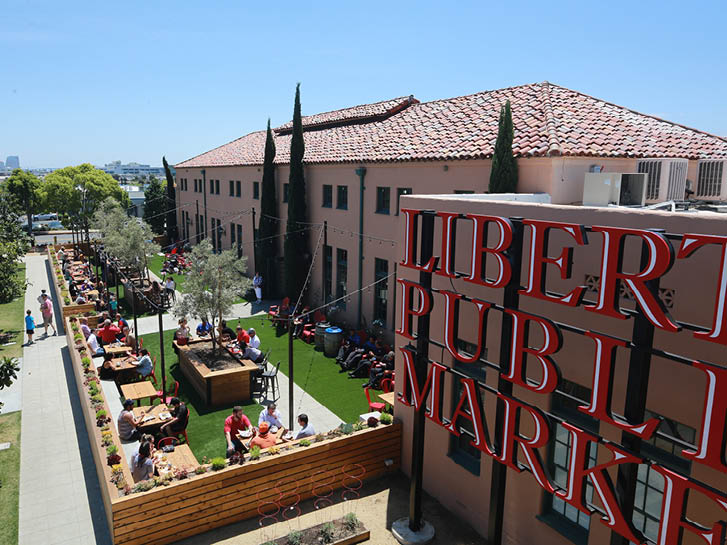 Neapolitan-style pies and Northern Italian entrees are baked in Officine Buona Forchetta's two gilded ovens - the true culinary stars at this Italian warehouse-style eatery. The "golden babies" Augusta and Sergio were made by hand in Naples with materials capable of withstanding the high temperatures typical of Neapolitan pizza-making. The restaurant also features a vintage Fiat automobile repurposed into a table for two.

A delicious way to start the day is sitting on the garden-like terrace of Fig Tree Café with an order of breakfast sushi. Or head to Breakfast Republic for an innovative menu with tasty takes on American classics such as Oreo pancakes, shrimp & grits and s'mores French toast.

For lunch or dinner, Slaters 50/50 is the stop to make if you've got a craving for burgers, bacon or beer. American fare like pepperoni flatbread, seared ahi salad, and an extensive drink menu make The Presley a popular local spot as well. 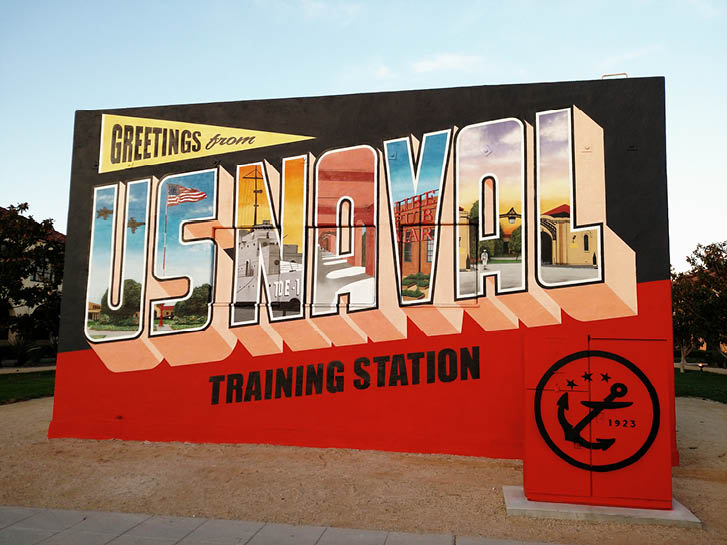 An abundance of museums, galleries, artist and design studios, dance companies, and other arts organizations showcase San Diego's creative community in ARTS DISTRICT Liberty Station. This dynamic hub of arts and culture bursts with authenticity, heritage, creativity, and innovation and is a place to be entertained, explore, learn, create, and meet local artists. Visitors can stroll daily through the ARTS DISTRICT and discover something new and wonderful each time.

Originally founded in 1983, Women's Museum of California moved to Liberty Station in 2011. The museum preserves women’s history by educating guests about women’s experiences and contributions through originally curated exhibits, educational programs, and community events. The outdoor exhibit, Waves of Feminism: Women Who Persisted, is a visual representation of the three different waves of U.S. feminism and the notable leaders in each era.

Most first-time visitors are amazed that contemporary quilt making can create such spectacular fine art. In addition to permanent and seasonal exhibits, the Visions Art Museum also presents lectures and workshops by noted quilt and textile artists throughout the year.

Liberty Station's artworks are not confined to indoor museums and art galleries. Some of the most striking art can be found outdoors. Located on the roof of Building 202 above the San Diego Watercolor Society, Rolling it Forward represents a boat and rolling waves made entirely of community-painted skateboards. The colorful Greetings from the U.S. Naval Training Station is an Instagrammers delight. The mural was inspired by the vintage "Large Letter" postcard art popularized during the 1930’s-1950's. 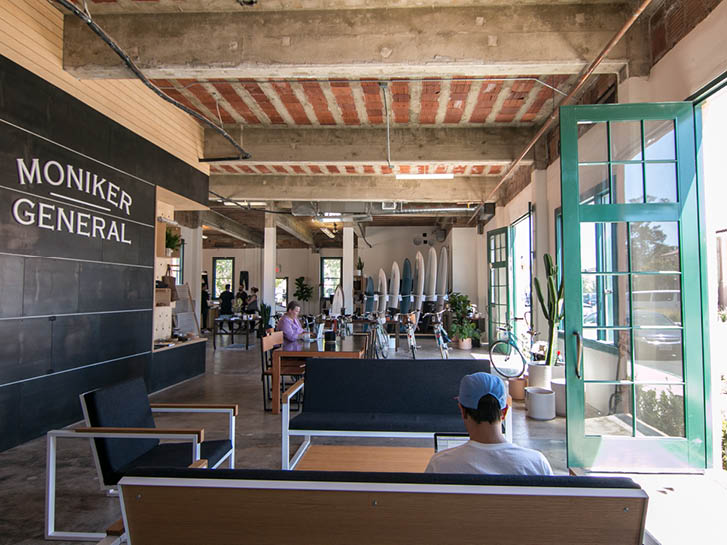 Shoppers and local artisans love this husband-and-wife-owned shop which originally opened in 2007 in trendy North Park as an art gallery to showcase local artists. Pigment is recognized for design-savvy gifts, flora, and furniture with a heavy focus on the fundamentals of art and good design. The owners’ past relationships with the local artist and artisan communities still continue today to be a backbone of the Liberty Station shop.

With community at its core, Moniker General is a retail shop and gathering spot featuring lifestyle and home goods, eyewear, custom furniture, and gifts in a spacious space shared with Moniker Coffee and Moniker Cocktail Co. People come together here to buy quality goods for a better life and home, whether its unique home goods and gifts, locally handmade bags, or handcrafted specialty cocktails and coffee.

Owner Cheryl Graf is a lifelong tea enthusiast. Some of her earliest memories are spending time with her grandmothers in the Midwest having tea parties. Guests are guaranteed to have similar memories and experiences like Cheryl while exploring the specialty teas and related accessories at Point Loma Tea.

This cozy, ceramics studio produces small batch, handmade pottery to enhance the home. Ceramic lovers can find functional wares that can used in everyday living and as home décor items.

Conscientious shoppers find approachable, high-quality surf craft, skateboards, and apparel made only from deadstock and sustainable, globally sourced fabrics at Imperfects. The mission behind the brand is simple: to highlight the good in humanity by focusing on one's imperfections. Like real imperfections, the shop's unique, one-of-a-kind items are created to tell a story and designed to last. 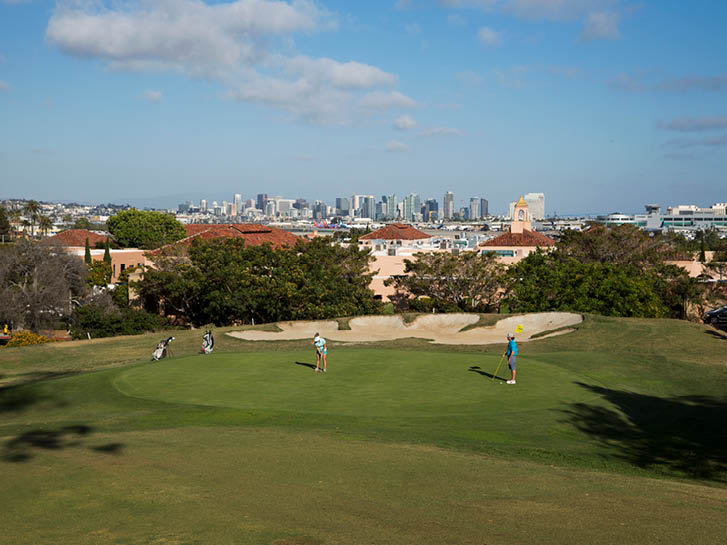 Dating back to the 1900s, The Loma Club was originally part of the historic San Diego Country Club. The 9-hole, par 3 course was utilized by the Navy during the 1920s for physical fitness and recruit training. Today, it attracts golfers of all levels with picturesque fairways, greens and practice facilities designed by San Diego architect Gary Bickler.

Outdoor enthusiasts can enjoy the scenic waters of nearby San Diego Bay by kayak or paddleboard. West Coast Paddle Board Rentals provides kayak and paddleboard rentals, SUP lessons, SUP pups instruction, and more. West Coast is located on the waterfront alongside the Courtyard by Marriott – Liberty Station hotel.

Liberty Station provides an array of options for outdoor fun like strolling, biking, throwing Frisbees and footballs, and relaxing with a good book under sunny skies. The Sybil Stockdale Rose Garden is set between two grassy lawns with a central fountain and intertwining pathways. The garden's vibrant rose bushes are selected and dedicated to honor Navy wives.

The South and North Promenades offer 75,000-square-feet of grassy area, perfect for casual games of ultimate Frisbee, touch football, and soccer. There are also pathways galore throughout Liberty Station and along the waterfront for strollers, joggers, bikers, and skaters to exercise and enjoy the outdoors throughout the year.