Dining with a View in San Diego

From the Pacific Ocean to San Diego Bay, hundreds of restaurants offer memorable meals just steps from the shore. Here are some of local waterfront favorites.

A Feast for all Your Senses

With more than 70-miles of coastline, it's no surprise San Diego is sprinkled with many spectacular spots for waterfront dining. From quaint Coronado to the sands of Cardiff Beach, there are restaurants galore offering outstanding meals with a view to match. Here are some local favorites that are as appealing to the eye as they are to the appetite. 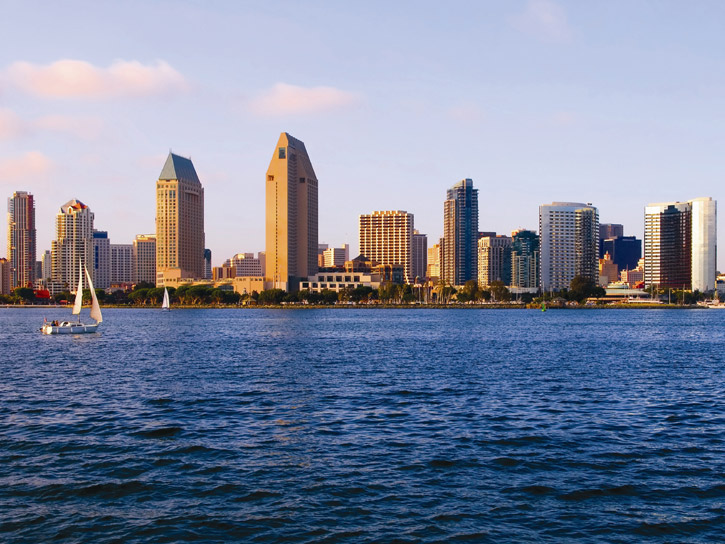 At San Diego's Embarcadero you'll find a bounty of bayfront restaurants waiting to be explored. In the center of Seaport Village in the Manchester Grand Hyatt San Diego, Sally's Seafood on the Water lives up to its name with outdoor tables overlooking the marina and a menu that ranges from sushi to ceviche and beyond. Just a few blocks north, you'll find the Fish Market, where the daily catch is char-grilled and oysters are served on a deck suspended above the water with a backdrop of sailboats. Or, get the ultimate view out on the water with a sunset cruise dinner aboard the Hornblower or Flagship boats. 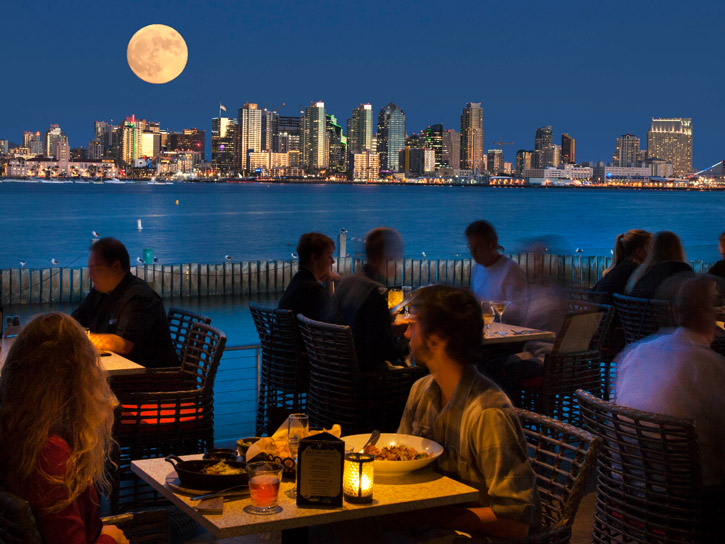 On the other side of the bay from the Embarcadero, Shelter and Harbor Islands are home to their own waterfront icons where mid-century cool still rules. On Shelter Island, the 1960s hot spot, Bali Hai Restaurant, still celebrates tiki culture, and its chic renovation has further elevated its appeal as a perfect spot for Mai Tais and South Seas cuisine like coconut shrimp pupus, ahi poke and fresh catch. Diners can arrive in style by boat and dock right by Bali Hai. Vessel is the mod restaurant at Kona Kai Resort that offers up views of the yacht-dotted harbor and cliff-side mansions on Point Loma. The menu features fun small plates and handcrafted cocktails, and live music and underwater images on giant video screens add to the scene. Retro cool Island Prime - C Level Lounge and sister restaurant Coasterra on Harbor Island, also makes the most of its location with floor-to-ceiling windows and an over-the-water patio where it's hard not to be distracted from your spicy steak salad and lobster mac 'n cheese by all the sleek yachts and water play fun. Humphreys offers inventive appetizers, fresh seafood and steaks with great views and nightly entertainment both at the BackStage Live Music Club and Humphreys Concerts by the Bay. 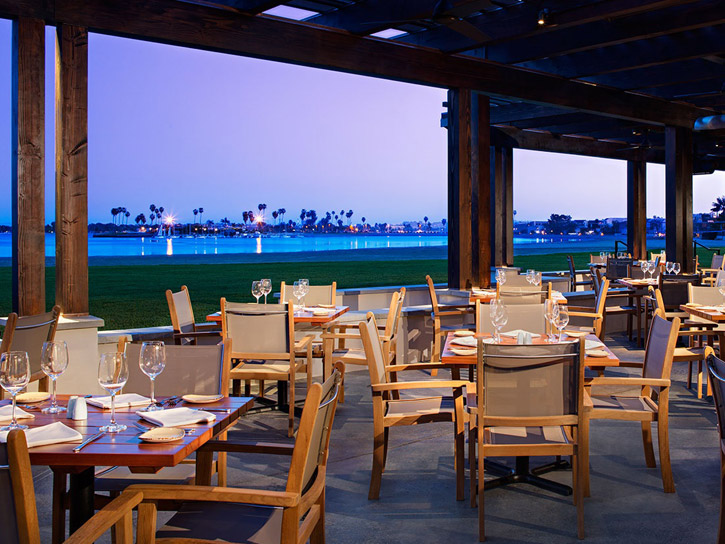 Just steps from Crystal Pier in Pacific Beach, JRDN offers a modern twist on waterfront dining. Here, overlooking the ocean waves, contemporary cuisine is paired with a cool vibe in a room filled with motion and music. The restaurant boasts an undulating wall, highlighted by colorful spotlights and an open-air patio separated from the beach by panes of glass where diners nosh on seafood and steaks while sipping colorful cocktails and watching the sun set. At Oceana Coastal Kitchen at the Catamaran Resort & Spa, alfresco dining and a seafood-centric menu await. Enjoy sushi, crabcakes, braised scallops and more, while watching the stand-up paddle boarders and kayakers glide across Mission Bay. 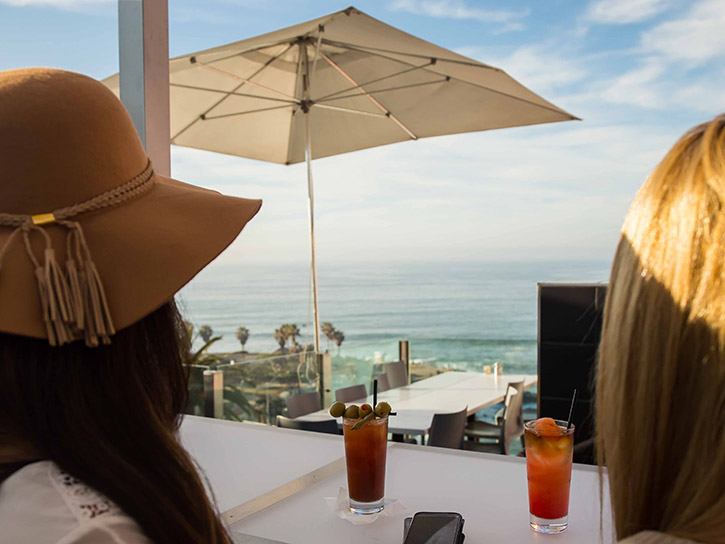 The Grande Dame of San Diego waterfront dining is most definitely the Marine Room. Built on the sands of La Jolla Shores, this iconic dining room has been a San Diego destination since debuting in 1941. The restaurant quickly became famous for pounding surf creating dramatic displays outside the expansive windows and executive chef Bernard Guillas' delicious contemporary French cuisine with an emphasis on seafood. At George's at the Cove, three restaurants await, all with ocean vantage points. George's Cal Modern melds executive chef Trey Foshee's progressive coastal cuisine that celebrates our local farms with spectacular views of La Jolla Cove, the cliffs of Torrey Pines and the endless blue of the Pacific. Up top, Ocean Terrace calls for roof-top dining that features handcrafted cocktails and SoCal gourmet casual cuisine like fish tacos, kale salad, pastas and more. That same menu can be found at Level 2, a lovely ocean-view spot to drink in the view and sip their Sea3 margarita with mango, lime zest and chile-infused tequila, agave and fresh lime juice, all strained over a saline ice cube with suspended seaweed. 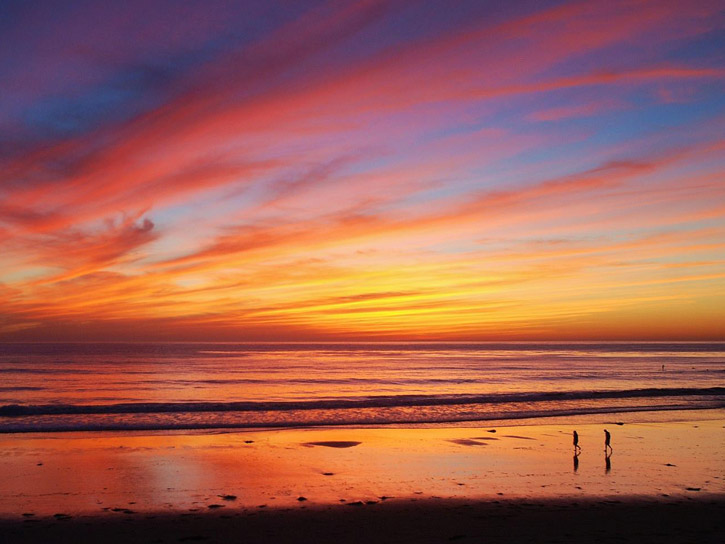 Pacific Coast Grill sits waterfront in lovely Cardiff-by-the-Sea. Grab a table on the patio or upper deck, an idyllic setting to sip blackberry margaritas, nibble on sushi rolls and watch the local surfing talent catch the last waves of the day at sunset. Dolphins frolic in the kelp beds and whales can be spotted seasonally as they migrate and feed off the coast.

Though not truly an island, at least not anymore, Coronado does offer nearly 360 degrees of waterfront dining. Iconic Hotel del Coronado, with its Queen Anne architecture and red roof turrets, is home to Sheerwater, a casual-yet-refined gem that serves up California coastal cuisine and stellar views of the Pacific. There's also waterfront dining at the Coronado Ferry Landing where you'll find Peohe's, known for its flavorful Pacific island-inspired fare and umbrella drinks, and Candelas on the Bay for a modern upscale take on the flavors of Mexico.

So whether you're an adventure seeker looking for dramatic surf and far-flung flavors or just a seafood lover looking for a port-side perch, San Diego's restaurants deliver on picturesque views of the Pacific or San Diego Bay that are a perfect pairing to their palate-pleasing fare.

Some of San Diego's top treasures for farm-fresh dining

Many San Diego chefs are turning their restaurants into temples of locally grown treasures. Here are some of San Diego's top culinary talents whose menus define the term "as fresh as it gets."

Throw Out The Rulebook

Two San Diego chefs are rockin’ the San Diego food scene by throwing out the culinary rulebook and rewriting the menu.

Given our proximity to the border, it's only natural that San Diego's the place for fantastic Mexican cooking. Find a list of local favorites here!

Reserve online or just walk in. A great way to take a bike ride right on the water in America's Cup Harbor, San Diego Bay. Have off our tandem or single bikes. Check in at Disco's Paddle...

Take the scenic route to San Diego.  Travelers ages 62 and older can enjoy a 15% savings off the adult rail fare on Pacific Surfliner trips year-round.  Onboard amenities include a...

Need to Know Package includes one guest room and $50 credit/night. Use for parking, food & beverage, or spa. Credit will be applied to room folio at check-out. Promotional Code: ZX0 What's...

Happy Hour at the Cove

Join us at Level2 Monday through Friday from 2PM - 6PM for happy hour overlooking the beautiful La Jolla Cove. Enjoy drink specials on beer, wine, and special holiday cocktails for a limited time.

Join us as we welcome in the New Year with Duca Carlo Guarini, the oldest wine making family in Italy Thursday, January 27th Recpetion starts at 6pm, followed by dinner at 6:30pm $65...

Hops on the Harbor With Modern Times Beer

Navigate your way through a five-course tasting menu aboard a yacht on San Diego Bay. Each dish is perfectly paired with delicious local brews from Modern Times Beer, celebrating the freshest flavors...